What you need to know: Rush hour bus lanes now in effect on busy DC corridors

As of Monday morning, lanes on two of D.C.’s busiest commuter corridors are now dedicated solely to buses as part of a new, summer-long pilot program to help test the impact of bus lanes downtown.

The new program, announced by Mayor Muriel Bowser on Friday, is intended to improve bus service and relieve congestion in an area where buses typically experience drastically reduced travel speeds during the busiest times of day.

In addition to buses, right-turning vehicles, bicycles, charter buses, school buses, and marked taxis would be allowed to use the bus lanes. Ride-hailing services, such as Uber and Lyft, may not use the lanes.

The trial period will continue through Sept. 27, during which the District Department of Transportation will collect data on bus travel speeds and reliability.

Lanes are marked with high-visibility red paint, pavement markings and signs. D.C. traffic officials and police will work to keep other vehicles out of designated bus lanes during peak hours.

For those wondering how to make a proper right turn when on a road with a bus-only lane, DDOT provided the following guidance:

As far as right turns go, the official regulation is that vehicles are permitted in the lanes 40 ft (approximately two car-lengths) from the intersection when turning right.

Enforcement will include ticketing and towing. By mid-morning, three cars had already been towed:

Need proof enforcement is in effect on Day One of rush hour Bus Only lanes on H and I Sts? pic.twitter.com/10PXCTePeL

In a news release on Friday, DDOT said the program is part of a larger effort to improve service for the more than 80,000 D.C. residents who ride Metrobus on an average day.

“The 16th Street dedicated bus lane stretching almost 3 miles between Arkansas Avenue to downtown should be up and running next year.”

Similar bus lanes are being built on K and 14th streets in Northwest.

WTOP’s Neal Augenstein contributed to this report from D.C. 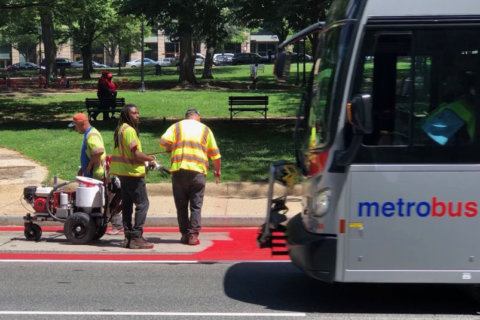 Proud Boy organizer arrested in Florida for riot at Capitol