It’s a tradition that runs deep for many racers and has spanned generations, and on Saturday, the 78th Annual Greater Washington DC Soapbox Derby made its comeback. See photos and video.
Listen now to WTOP News WTOP.com | Alexa | Google Home | WTOP App | 103.5 FM

It’s a tradition that runs deep for many racers and has spanned generations, and on Saturday, the 78th Annual Greater Washington DC Soapbox Derby made its comeback.

Racers from 7 to 20-years-old sped down Capitol Hill in makeshift, motorless race cars, hopeful gravity would guide them to the finish line and victory.

Ian Jameson got into racing when he was 10-years-old after watching his uncle. Then he inspired his sister and brothers to also join.

“I just like racing and going fast, the competitiveness of it,” Jameson said.

For Aspen Tomasello, who began when she was 7-years-old, soapbox racing has been in the family for decades, a tradition her grandfather started. She said her best advice to beginners is to have fun. 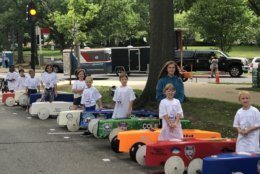 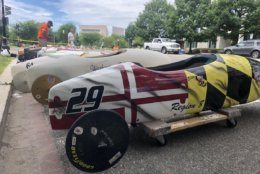 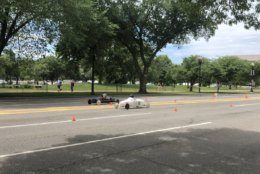 Among the newbies joining the race for the first time, William Fouch and his son, Emmett. Fouch recently returned home after 9 years in the Marine Corps and said he’d been looking for a way to bond with his son Emmett, who is autistic.

“Honestly, I thought it was like, you put four pieces of plywood together and throw it down a hill,” said Fouch.

But standing next to his son as he pointed out his name and stickers decorating his soapbox, the process of building and racing is one Fouch said he will never forget.

“It’s not like life or death or anything, it’s just fun,” Fouch said. “It’s something to do with your family and build memories.”

Finalists from races across the U.S. will go on to compete in the All American Soap Box Derby in Akron, Ohio.