Watchdog office: DC police’s use of force is on the rise

Within the department, officer-reported use of force incidents increased 20 percent from 2017 to 2018, and they're up 83 percent since 2015, according to a report released last week by the District's Office of Police Complaints.
Listen now to WTOP News WTOP.com | Alexa | Google Home | WTOP App | 103.5 FM

Reports of police using force in the nation’s capital are on the upswing.

Within the Metropolitan Police Department, officer-reported use of force incidents increased 20 percent from 2017 to 2018, and they’re up 83 percent since 2015, according to a report released last week by D.C.’s Office of Police Complaints.

That city agency, which is independent of D.C. police, said that D.C. officers used the appropriate level of force, or less, in about nine out of 10 use-of-force incidents last year.

“The opposite way of looking at it is [in] almost one out of 10 instances, more force was used than was necessary,” said Mike Tobin, executive director of the Office of Police Complaints.

The report states that more than one-third of D.C. police officers reported using force in 2018.

On Wednesday, Tobin told the D.C. Council Committee on the Judiciary and Public Safety that the use of force is “something that we have to start digging into with the police department” over the department’s training, culture and policies.

The uses of force range from forcible handcuffing all the way to firing shots, and include things like takedowns, pepper spray and baton strikes.

D.C. Police Chief Peter Newsham, however, told the committee the long-term numbers paint an inaccurate picture. He said use-of-force reports jumped between 2016 and 2017 because of a change in department policy. 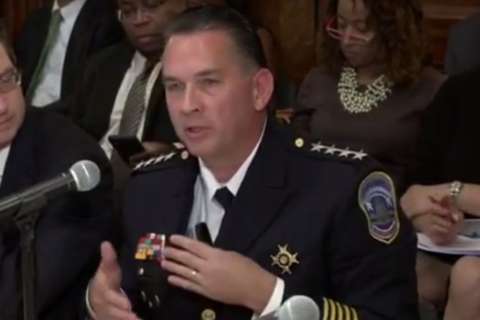