At the Washington National Cathedral, brick by brick a LEGO replica of the iconic Northwest D.C. church takes shape with the help of visitors. With the project, the cathedral hopes will bring in more than $800 thousand to help with repair costs from the 2011 earthquake.
Listen now to WTOP News WTOP.com | Alexa | Google Home | WTOP App | 103.5 FM

At the Washington National Cathedral, brick by brick a LEGO replica of the iconic Northwest D.C. church takes shape with the help of visitors. The cathedral hopes the project will bring in more than $800,000 to help with repair costs from the 2011 earthquake.

“It’s an opportunity to raise funds but also to help visitors engage the building, to understand how it comes together and hopefully connect with the institution in some new ways,” said Charles Fulcher, director of visitor programs at the Washington National Cathedral.

In the gift shop, visitors purchase bricks for $2 apiece and then are directed to a table in a room where the foundation of the 13-foot-long cathedral sits. With a detailed guide handy, a church staff member helps visitors put their bricks in the correct place.

“A model this massive can seem a little intimidating but it actually is put together very logically and is broken down in to small modules,” Fulcher said.

After enough bricks are purchased for a module to be completed, the module is then affixed to the model.

The cathedral is slowly taking shape as the walls come up around a LEGO lectern which is already in place. 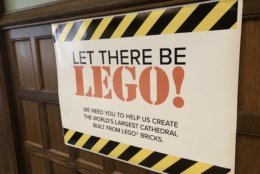 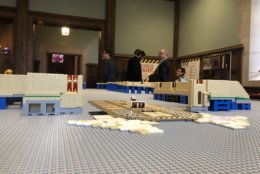 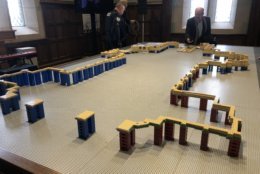 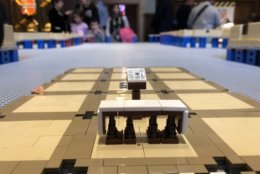 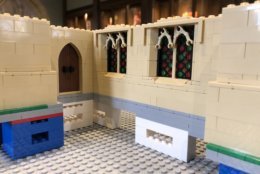 Fulcher said the idea came from a similar project that took place at the Durham Cathedral in England a couple years ago. After traveling to the cathedral, Fulcher brought the idea back to D.C.

“It took about two years of work, to work out the details, to fundraise the initial costs for this and we estimate that the project for us would take about two and three years of building,” Fulcher said.

A British firm called Bright Bricks is still finishing up the design for the LEGO house of worship. Initial estimates showed that 400,000 bricks would be needed to construct the cathedral, but according to Fulcher that number could top 500,000 once it is complete.

The money raised by the project will go toward the $19 million bill, which remains, for damage caused to the cathedral by the 2011 earthquake.

“It’s so good to mix the LEGO spirit of building and getting together with the cathedral and a good cause,” said Margarida Botelho, of Portugal, who purchased a brick while visiting the cathedral.

For visitor Phyllis Wilkerson of Canton, Michigan, she plans to come back to D.C. in the summer with her young grandchildren and looks forward to bringing them to the cathedral to help build the model.

“This will really engage them with the cathedral because they have helped build a LEGO cathedral,” said Wilkerson.

For those who can’t come to the cathedral, donations can be made online for bricks, which volunteers will then add to the replica.