Bald eagle Liberty — whose longtime mate Justice flew the coop just a few days after she laid the first of two eggs this season — appears to have abandoned her eggs and left the nest in the company of another male eagle she was seen mating with. Is it the beginning of another bald eagle power couple? It turns out, it's "really hard to tell eagle emotions," one expert says.
Listen now to WTOP News WTOP.com | Alexa | Google Home | WTOP App | 103.5 FM

Bald eagle Liberty — whose longtime mate Justice flew the coop just a few days after she laid the first of two eggs this season — appears to have abandoned her eggs and left the nest in the company of another male eagle she was seen mating with.

“There’s no possible way those eggs would hatch at this point,” said Tommy Lawrence, managing director with the Earth Conservation Corps, which maintains the eagle webcam that broadcasts the doings in the nest. “They’ve been left in the cold for way too long, and so those eggs are gone for now.”

The normally staid eagle nest above the D.C. police academy in Southwest D.C. has been beset by uncharacteristically high drama this year, including Justice’s sudden disappearance and the arrival of two rival suitors who both tried to court Liberty.

“This has never happened before,” Lawrence said of the comings and goings, which have been breathlessly followed and documented by watchers of the 24-hour eagle cam. “In the eagle cam world, we were always known as the beginner nest. So for anybody who was new to watching eagle cams, they would recommend watching our nest, just because typically there has been no drama and it’s been an easy ride.”

Watch the cam yourself:

Here’s a recap of all the twists and turns if you’re just getting caught up, plus what Lawrence thinks might happen next.

Liberty and Justice had nested together since 2005, successfully raising, on average, two eggs a season, Lawrence said.

But a few days before Liberty laid her first egg earlier this month, Justice vanished. That’s when another male eagle — eventually dubbed “Aaron Burrd” — swooped in. He had scratches on his talons, leading observers to speculate he had fought with Justice and possibly chased him off and out of the area.

For the first few days after Justice’s disappearance, Liberty did not take too kindly to her new gentleman caller. She was observed on camera calling out for Justice and defending both her egg and herself from the interloper, who was spotted trying to mate with her while she was sleeping.

Eventually, Liberty laid a second egg (still from her mating with Justice) and seemed to be warming up to Aaron Burrd, exhibiting what the eagle log called “mating behaviors” toward him.

But then a second male eagle began hanging around. Liberty was seen on the camera trying to bite and chase off the as-yet-unnamed male eagle — eagle watchers called him simply “M2.”

But then she seemed to have yet another change of heart.

“M2 came in and chased Aaron Burrd off and then wooed Liberty,” Lawrence said. It turns out M2 was more mature than Aaron Burrd and, at Liberty’s coaxing, even attempted to incubate her eggs.

“It was an interesting thing that we hadn’t really seen before: another male eagle come in to incubate another male’s eggs,” Lawrence said.

That seemed to bode well for Liberty and M2’s future coupledom, which took the next step early Thursday morning when Liberty and M2 were seen mating on a branch near the nest and then flying off, leaving the eggs unattended all day. Because the eggs were left exposed to the cold all day, Lawrence said, they are no longer viable, and Liberty “has moved on.”

After flying off, the new couple likely spent the day out hunting, fishing — and potentially mating. If Liberty is still fertile, that could mean a new clutch of eggs in the very near future, he said.

“We only see what’s happening on the nest, so we don’t know what’s happening off the nest,” he said. “If they’re out on the Potomac somewhere and they’re fishing — and mating as well — then they could come back and we could see eggs in the next couple weeks,” Lawrence said.

As if all that weren’t complicated enough, while Liberty and M2 were out cavorting Thursday, two other male eagles were seen on camera stopping by the nest and poking around the eggs. The number of random visitors to the nest in recent days led some eagle cam watchers to dub it the “Airbnb of eagle nests.”

Liberty and M2 seem poised to settle down together in the nest and — maybe this year — raise their first fledglings.

But what about Justice? The once-proud patriarch of D.C. eagles could still make a return to the scene.

In other nests, the longest that a male eagle has absconded for is about two weeks. Justice was last seen Feb. 9.

Even if Justice does return, “it would be interesting to see if Liberty accepts him again, now that she has kind of moved on him and has courted and mated with other eagles,” Lawrence said, adding: “It’s one of those things where it’s really hard to tell eagle emotions.”

For faithful eagle cam viewers, all this drama can’t help but feel a bit sad. The Earth Conservation Corps’ policy is not to interfere with the nest or eggs, Lawrence said, so they can only work to figure out what happened to Justice, let nature play its course and hope for the best.

“It’s kind of like a soap opera, and sometimes it’s sad, but we hope that next season, it gets better,” he said. 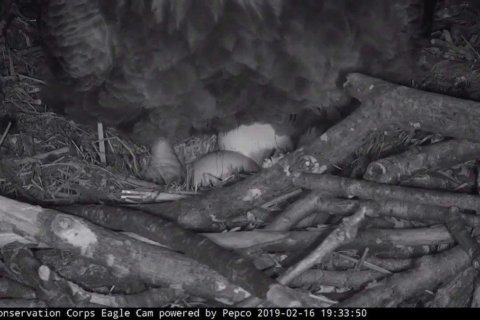