The third-annual Women's March on Washington is set for Saturday morning near Freedom Plaza — regardless of whether the partial shutdown ends. The ongoing government impasse, however, has altered plans a bit, organizers announced Wednesday. Here's what you need to know.
Listen now to WTOP News WTOP.com | Alexa | Google Home | WTOP App | 103.5 FM

An afternoon rally on the plaza, located on the north side of Pennsylvania Avenue between 13th and 14th streets Northwest, follows the march.

This is a change from earlier plans, which involved meeting on the National Mall and later rallying at Constitution Gardens.

WTOP’s Melissa Howell, reporting from Freedom Plaza, spoke with Lynn Maginity from Michigan, who was with two other generations of women from her family.

“We’re here supporting women’s rights, disability rights,” she said. “I think we need to get over the clashing and pointing fingers, and really just get back on track.”

Preparations for this year’s march were roiled by an intense ideological debate among the movement’s senior leadership. In November, Teresa Shook, one of the movement’s founders, accused the four main leaders of the national march organization of anti-Semitism.

The accusation was leveled at two primary leaders: Linda Sarsour, a Palestinian-American who has frequently criticized Israeli policies, and Tamika Mallory, who has maintained a public association with Nation of Islam leader Louis Farrakhan.

Shook, a retired lawyer from Hawaii, has been credited with sparking the movement by creating a Facebook event that went viral and snowballed into the massive protest on Jan. 21, 2017. In a recent Facebook post, she claimed Sarsour and Mallory, along with fellow organizers Bob Bland and Carmen Perez, had “steered the Movement away from its true course” and called for all four to step down.

The four march organizers have denied the charge, but Sarsour has publicly expressed regret that they were not “faster and clearer in helping people understand our values.” 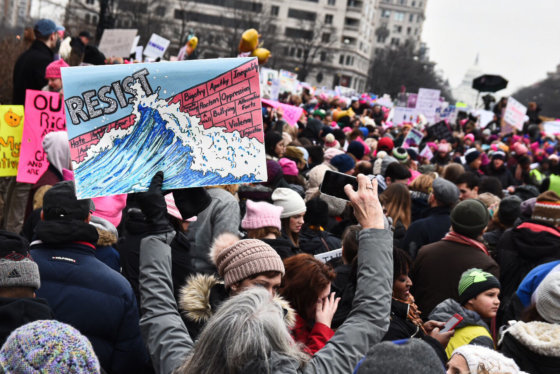 2019 Women’s March: Photos from DC and around the US

The first Women’s March came in January 2017. This year it may also include furloughed workers impacted by the partial government shutdown.

Despite pleas for unity, the internal tensions were most keenly felt in New York. An alternate women’s march organization held a parallel rally a few miles away from the official New York Women’s March protest, and one activist actually disrupted the main protest.

Molly McKee was in D.C. from Kalamazoo, Michigan. She said she came to Washington this weekend to see changes in immigration and health care policy. “I just want politicians in office that don’t lie, and tell the truth, and want to work together to accomplish something.”

On the stage, two of the early speakers were activists Nina Turner of Cleveland, Ohio, and Bamby Salcedo of Los Angeles.

Salcedo spoke about the influence transgender women can have in the movement, and said this is not the only time women like her have worked to call attention problems in society.

She said those in the transgender community should not let themselves be defined by others.

“We will define ourselves. We are here reclaiming our space, not only today but for many years and many movements to come. We are here, we have been here and we will continue to be here.”

Turner, a former state senator from Ohio, spoke about the endurance of the feminine spirit.

“The feminine spirit is about truth, justice and uplift,” she said from the stage. “The Women’s March has an agenda in 2019 of ‘justice for all.'”

Turner reminded people that they are not powerless to effect change as individuals. She reminded those in attendance that women like Rosa Parks and Fannie Lou Hamer started equal rights and women’s voting movements all by themselves.

“They understood the power of one,” Turner said.

See tweets from WTOP reporters on the scene:
Women’s March 2019
Another event, called “The March for All Women,” is going on nearby. That march is in response to the Women’s March, which organizers say is an effort to represent “diversity of thought.” The “March for All Women” is at Pershing Park, across 14th Street from Freedom Plaza.

WTOP’s John Aaron, Melissa Howell, Dan Friedell and the Associated Press a contributed to this story.