The office of D.C. Attorney General Karl Racine filed suit against U.S. Immigration and Customs Enforcement, alleging that the agency has failed to properly respond to requests for information about raids carried out earlier this year in predominantly Latino communities in the District.
Listen now to WTOP News WTOP.com | Alexa | Google Home | WTOP App | 103.5 FM

WASHINGTON — The office of D.C. Attorney General Karl Racine filed suit against U.S. Immigration and Customs Enforcement (ICE) on Monday, alleging that the agency has failed to properly respond to requests for information about raids carried out earlier this year in predominantly Latino communities in the District.

“We are very concerned that District residents may have been racially profiled and unfairly targeted during ICE raids in the city this summer,” Racine said in a statement, adding that his office wants to know more about those detained and their current status. “Our immigrant neighbors should not have to live in fear of law enforcement. District residents deserve to know the facts regarding the ICE raids.”

The lawsuit was filed in U.S. District Court in the District of Columbia.

The suit follows a recent call for a congressional hearing on the issue made by Del. Eleanor Holmes Norton, D-D.C. She has indicated frustration with ICE, saying she’s been trying for months to get more information.

“I can’t tell you I know what has happened to these people, so we think these raids are not following the guidelines,” Norton told WTOP.

ICE earlier this year confirmed that agents carried out immigration enforcement actions, but did not provide specific information on the number of those arrested or charges filed. In a statement to The Washington Post, a spokeswoman for ICE said in July that agents do “not conduct raids or target individuals indiscriminately.”

As a matter of policy, ICE does not comment on pending litigation, Justine Whelan, an ICE spokeswoman, said in an email to WTOP on Monday.

Immigrant activists say the raids carried out in Latino areas of the District around Columbia Heights this summer led to heightened anxiety among residents. The raids led to a demonstration in July, involving hundreds of activists and supporters.

Norton questions whether ICE had specific evidence that undocumented immigrants were living in areas that were the subject of the raids.

“We have no reason to believe that’s what they’re doing,” Norton said. “If they want to say they are, prove it.”

Norton said she was not satisfied with an ICE offer for a briefing, which she indicated would have been with a “low-level official.” That led her to call for a congressional hearing.

Racine said in the lawsuit that ICE has not responded in a timely fashion to requests for more information. The suit says that on July 19 his office requested records for “approximately twelve District residents” who were detained in July. The request also sought information related to “enforcement actions, including policies related to racial or ethnic profiling.”

The attorney general made a Freedom of Information Act request, and says in the suit that ICE had still failed by Oct. 5 to respond. The suit requests that the court expedite the case and order ICE to promptly provide all records related to the attorney general’s request. 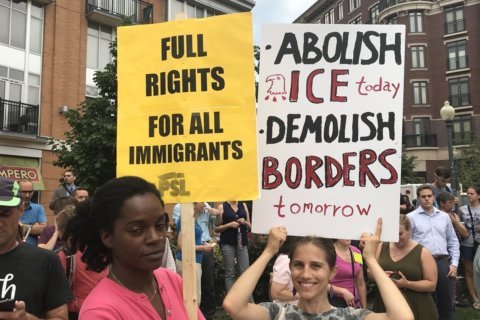