On the local level, the more than 30 protesters gathered demanded for the resignation of the Archdiocese of Washington 's Cardinal Donald Wuerl; their broader demands include structural changes for the church as a whole.
Listen now to WTOP News WTOP.com | Alexa | Google Home | WTOP App | 103.5 FM
(1/6) 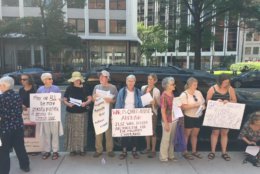 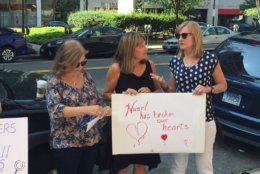 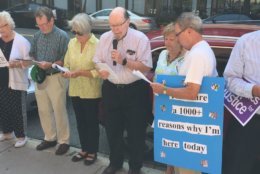 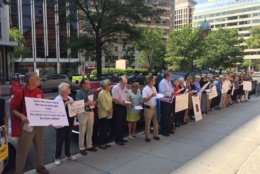 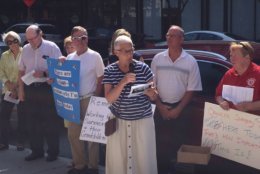 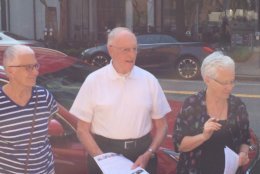 WASHINGTON — More than 30 people gathered in front of St. Matthew’s Cathedral in D.C. to push for major changes in the Catholic church. On the local level, they demanded for the resignation of the Archdiocese of Washington ‘s Cardinal Donald Wuerl; their broader demands include structural changes for the church as a whole.

It’s the latest chapter in the ongoing sex abuse scandal in the church, renewed in D.C. by the numerous times that Wuerl was named in a report that covered his 18 years leading the Pittsburgh diocese.

A spokeswoman defended his record in an email saying, “His record in Pittsburgh shows that he acted diligently in removing every priest from ministry with an allegation against them and that he acted to ensure the safety of young people.” The spokeswoman said Wuerl has no intention of stepping down

While some of the protesters acknowledged the cardinal did more than other bishops, they didn’t seem to think it was so cut and dry.

Marie Dennis, a Petworth resident, says her son was abused by a priest years ago in Virginia. She said the pain is long-lasting, and still lingers today.

“It’s very hard for him to see any good in the Catholic church, institutionally,” Dennis said, admitting it “creates conflict” in their relationship since she still practices her faith. “I differentiate between the institutional Catholic church and the church that is the people of God.”

That’s also how Bill Casey of Arlington also manages to continue practicing his faith even as he calls for major changes in the clericalism that guides the church.

“I am deeply angry,” Casey admitted. “As far as I’m concerned, that trust is gone. The only way that I see it beginning to change is if they come out of the sanctuary and sit with the people in the pews, and with an equal voice begin to look at what harm has been done to everyone and how that harm can be repaired under the tenants of the Gospel of Christ.”

There was one priest in the crowd of protesters, too.

“These are really good Catholic people, they’re faithful people,” said Joe Nangle, a priest at Our Lady Queen of Peace in Arlington, which is not governed by the Archdiocese of Washington. “It’s very important for the clergy to at least accompany these people. You don’t have to lead them, they’re doing plenty of leading and doing well.”