Keeping kids off cellphones in class can be a challenge, but Woodrow Wilson High school in D.C. is taking away the temptation by having students put their devices in lock bags.
Listen now to WTOP News WTOP.com | Alexa | Google Home | WTOP App | 103.5 FM

WASHINGTON — Keeping kids off cellphones in class can be a challenge, but a high school in D.C. is taking away the temptation by having students put their devices in lock bags.

As first reported by NBC Washington, the use of Yondr bags at Woodrow Wilson High School in Northwest D.C. will begin as a pilot program in math and science classes.

So, how does it work? Students walk into class, grab a Yondr bag, put their phones inside and lock the bags, and that’s where the phones stay until a device at the exit unlocks the bag that is then left behind. The phone never leaves the student’s possession.

The move is intended to help build student self-efficacy, which is self-confidence in their ability to complete assignments and learn, understand and remember complicated ideas, according to a statement from school principal Kimberly J. Martin.

“What we’re asking students right now is to be cellphone free for three hours. Just three hours,” Martin told NBC Washington. “They have a six-and-a-half hour day. So, the rest of their time, they’re able to use their phones.”

The program will expand to other class subjects as the year progresses.

Some students expressed concern to NBC Washington about not having access to parents or communication in the event of an emergency, school lockdown or evacuation. A list of frequently asked questions on the school’s website responds to that concern, stating in part:

“In an evacuation, students would not proceed to their lockers to get their phones, but would leave the building promptly. In the event of a lockdown, students should be attuned to following emergency responder and staff directions, not using cellphones. Once the incident is safely ended, students will be able to unlock phones to reach family. In many true catastrophic emergency situations, cell service is disrupted due to the volume use, making phones unusable.”

The lock bag program only is in practice at Wilson High. Individual schools in D.C. all have their own cellphone use policies. 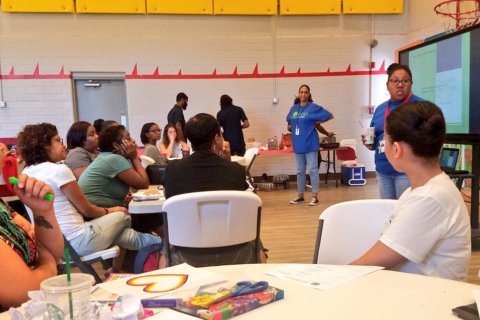 Survey finds Md. teachers use own money to buy supplies, have 2nd jobs