Business boost for bars around Capital One Arena

Some bars and restaurants in the Chinatown neighborhood are seeing more green, thanks to the the Washington Capitals' fight against the Vegas Golden Knights in the Stanley Cup Final.
(1/2) 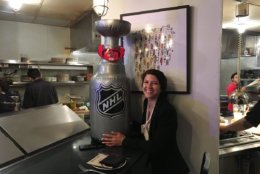 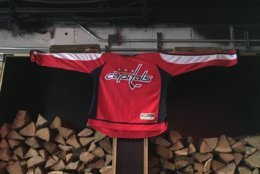 WASHINGTON — Some bars and restaurants in the Chinatown neighborhood are seeing more green thanks to Capitals fans who “Rock the Red” during the Stanley Cup Finals against the Vegas Golden Knights.

Saturday’s Game 3, which was played on home ice, was a really good night for some bars and eateries along 6th Street Northwest.

“It’s been a lot of fun. It’s been pretty busy with all of the fans that are around.  With the streets closed off as well it got pretty packed,” said Fernanda Bernardes, who manages Graffiato DC.

She tells WTOP there was a sea of red in support of the home team: “The energy was high, the crowds were high, everything was good. It was a good time.”

Even though they didn’t see as much traffic during Games 1 and 2 when the Caps were away in Las Vegas, Bernardes is hoping customer turnout for Monday’s Game 4, also on home ice, will replicate Saturday night.

Rock the Red signs welcome fans at Graffiato and down the block at Bar Deco. At Graffiato, there’s even a blow-up Stanley Cup replica sitting in on a dining counter near the kitchen that they’ve given some Caps flair.

“We have an Ovechkin beard on there that says, ‘Rock the Red,’” Fernanda laughs.

Bar Deco’s floors were packed with customers Saturday night, which general manager Chelsea Sexton says was a record for them.

“It was crazy. It was the busiest night we’ve ever had … ever,” she said.

Sexton showed a photo taken from one of the upper floors — with a line of customers snaking down the block waiting to get inside.

“Whenever the Caps play, there’s always a good turnout,” Sexton said. “It’s always a fun party … We love the Caps here, so it’s good all around.” 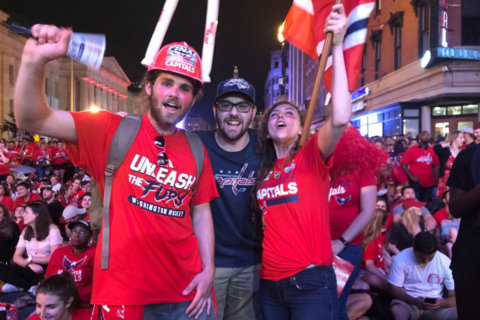