Frederick’s resignation is one of nine demands made by students when they began their protest on Thursday night.

The alumni council cited the “many advancements” under Frederick’s tenure including tuition refunds for on-time graduation, increases in faculty salary and the full re-accreditation of the Colleges of Medicine, Dentistry and Pharmacy and the law school.

The alumni council did acknowledge the protesters’ grievances and cited the history of protests on campus during the 1960s, ’80s and ’90s.

“When we see student protests, we know it is an indication that voices are not being heard,” Pinto wrote. “It is important that the University address the issues brought by students and we implore the students to understand the power of their position and the position of leadership.”

Organizers’ list of demands includes adequate housing for all students under 21 and extending the deposit deadline for fall 2018; an end to “unsubstantiated” tuition hikes; an end to rape culture on campus; the disarming of campus police officers; and the immediate resignation of Frederick and the board of trustees.

Students have been meeting with members of the board of trustees to negotiate their demands and on Sunday, the board agreed to meet one of the demands: Extending the deadline to submit a $200 housing deposit until May 1.

“Collectively, the board of trustees was extremely impressed with the way that the students have handled the negotiations,” alumni trustee Rock Newman told reporters on Saturday. “They have been productive, and we’re hopeful that they can continue that way.”

The protest at the administration building began a day after the university acknowledged a financial aid scandal that resulted in six employees being fired.

Members of the student group HU Resist, said the scandal is only one part of their protest.

“That highlights a very serious and very pervasive issue of the lack of transparency with this administration, the lack of student involvement in all functions,” said Alexis McKenney, a leader of HU Resist.

While both sides have acknowledged some degree of progress in the discussions, protesters have vowed to continue their occupation of the administration building until their demands are met.

“We want to make sure that we’re making progress and not just talking in circles,” McKenney said. “So we’re taking it one step at a time, one demand at a time to really make sure that we speak to the heart of these issues.” 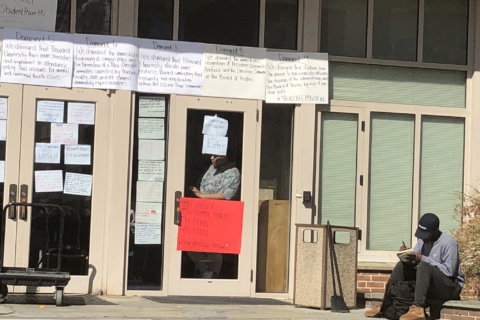