After months of speculation and a widely watched TV interview on Sunday, former FBI director James Comey’s book “A Higher Loyalty” went on sale Tuesday, and at one D.C. bookstore the book was selling well.

WASHINGTON — After months of speculation and a widely watched TV interview on Sunday, former FBI director James Comey’s book “A Higher Loyalty” went on sale Tuesday, and at one D.C. bookstore the book was selling well.

At Politics and Prose on Connecticut Avenue in Northwest D.C., the books were stacked on tables and filled the wall behind the register. “You can’t miss it,” said Jon Purves, the store’s director of marketing and publicity.

Customer Laurel Reiner said that Comey “has a lot to say, and it’s very important.” She said she isn’t buying the book but will read it. “It has to do with our ethics as Americans — what are we all about as a nation?”

Robert Minsh and Mary Borthwick, visiting from Juneau, Alaska, had mixed feelings about the book. Borthwick said she didn’t plan to buy it, adding that she saw Comey’s Sunday-night interview on ABC and predicting that “probably nobody’s mind is going to be changed by it.” 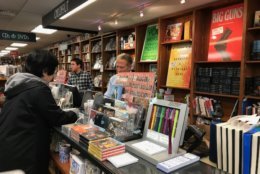 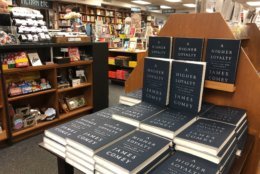 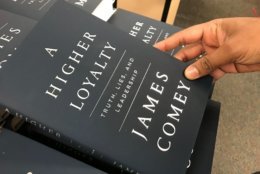 Minsh said he was more interested in what Comey had to say about his interactions with other presidents. “The rest of it has all been in the news.”

Purves described “kind of a steady stream of people coming in” to get the book, most of whom were picking up copies they’d already ordered before the publication date. “We have other people who just made a note to get in early.”

He added, “There were certainly people in here this morning,” though he wouldn’t describe it as “a line out the door.”

President Donald Trump fired Comey in May 2017 amid the FBI’s investigation into Russian interference in the 2016 presidential election. The move led the Justice Department to appoint Robert Mueller as special counsel to oversee the investigation, which Trump has denounced as a “witch hunt.” The president suggested earlier this week that Comey should be put behind bars and accused him of leaking classified information and lying to Congress.

“That is not normal,” Comey responded Tuesday during a live interview on ABC’s “Good Morning America.” ”That is not OK. … The president doesn’t get to decide who goes to jail.”

Comey is joining WTOP for an interview Wednesday at 9:10 a.m.

The Associated Press and WTOP’s Rick Massimo contributed to this report.