WASHINGTON — In the wake of vehicle-based attacks like the ones in New York and Charlottesville, Virginia, D.C. police are instituting new parking rules along race and parade routes that could force thousands to move their cars during major events.

“With the advent of vehicle attacks that we have seen in the United States and around the world, there is a necessity to implement parking restrictions, which include removing all vehicles along special event routes, particularly during races and parades,” D.C. police said in a statement to WTOP.

“I have a hard time understanding that that’s an appropriate response to a threat when I feel like the much-more-likely scenario is … somebody with a backpack, if that really was how they wanted to harm and do damage,” Allen said.

The extra disruption of forcing many more cars to move has already led some neighborhoods to question permitting for events that have gone on for years, including the Capitol Hill Classic in Allen’s ward.

The new parking rules will apply to that race, the Rock ‘n’ Roll Marathon on March 10, and future events.

“We want to have safe, successful events, but it almost feels like at times, the safest event is the one that no one ever goes to,” Allen said.

Christopher Rodriguez, D.C.’s homeland security and emergency management agency director, responded that the Police Department made the final decision on the new parking policies, but his agency assists with threat analysis. He was not aware of any specific, direct threats to races or any other events in D.C. neighborhoods.

“These types of threats exist at all times and in any place,” Rodriguez said. “Most times now, in this threat environment, we’re never going to get the piece of intelligence or the piece of information before something happens.”

The new rules initially emerged publicly at an Advisory Neighborhood Commission meeting last week as part of discussions about the March 10 marathon, but the Police Department declined to provide further details at the time on what the parking changes would entail.

A spokeswoman said then that the details were still being ironed out with other agencies.

Now, the rules are officially rolling out for relevant events moving forward, and police have promised to include the parking restrictions in their traffic advisories sent out in the days before an event.

Certain neighbors would be able to get one-day parking permits in some locations, through what Allen described as a “convoluted” process.

“I’ve got to know that it’s grounded in some type of really legitimate threat if that’s where we’re going to go, because it’s really creating a really significant problem for a lot of these race organizers … and it’s coming really late in the process, when these races are only a month or two away,” Allen said Thursday.

The expanded parking restrictions will apply to thousands more parking spaces than before for some races or events like marathons that crisscross the city. It would also add to costs for some event organizers if many cars need to be towed.

The policy change does not change road closures around an event, such as roads that approach a race route or event area.

“We understand that this measure can be inconvenient for some residents and visitors, but we are convinced it is the best practice for protecting citizens from being injured or killed. The goal is to ensure the safety and security of special event participants, spectators, residents and visitors in Washington, D.C.,” the Police Department’s statement said Thursday.

“No parking” signs must be posted 24 to 72 hours in advance of the restrictions kicking in, depending on the location in D.C.

Generally, Allen said, D.C. must decide what kind of city it wants to be.

“Where is something going to be a smart, strategic investment … and then, where is it security theater, and it’s not actually helping us be able to protect and respond,” he said. 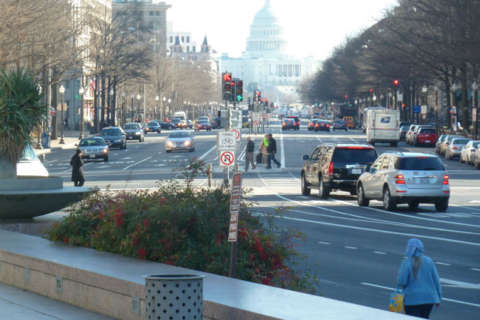