The stretch of Wisconsin Avenue in Northwest D.C. between Davis and Edmunds streets will now be named after a Russian pro-democracy leader who was assassinated in 2015.
Listen now to WTOP News WTOP.com | Alexa | Google Home | WTOP App | 103.5 FM

WASHINGTON — The D.C. Council approved legislation this week that sends a message to Russian President Vladimir Putin by changing the name of a section of street outside the Russian Embassy to honor pro-democracy Russian leader Boris Nemtsov.

The stretch of Wisconsin Avenue in Northwest D.C. between Davis and Edmunds streets will now be known as Boris Nemtsov Plaza.

Nemtsov, a top opponent of Putin, was assassinated in Moscow in 2015. He was gunned down on a bridge within sight of the Kremlin.

At the time of his death, he was working on a report about Russia’s military involvement in the war in eastern Ukraine and in the annexation of Crimea from Ukraine. The report was released three months later.

“This sends a message of solidarity to those fighting for democratic principles around the world,” said Mendelson.

The embassy will not get a new official address, but a street sign bearing the new name will be added under the Wisconsin Avenue sign.

City leaders plan to unveil the new sign during a ceremony in late February, on the third anniversary of Nemtsov’s death.

“There’s little doubt that his murder was motivated by his political beliefs,” said Councilmember Mary Cheh. “Attempts to wipe away Boris Nemtsov’s sacrifice will not succeed. The Russian government will not be able to do that here on American soil.”

Cheh decided to pursue the proposal after a discussion with members of the U.S. Senate, including Sens. Marco Rubio, R-Fla., and Christopher Coons, D-Del., who had been trying to pass the bill on Capitol Hill.

In July of last year, the man convicted of killing Nemtsov, Zaur Dadayev, was sentenced to 20 years in prison.

Four others convicted in connection with the assassination were sentenced to terms ranging from 11 to 19 years. 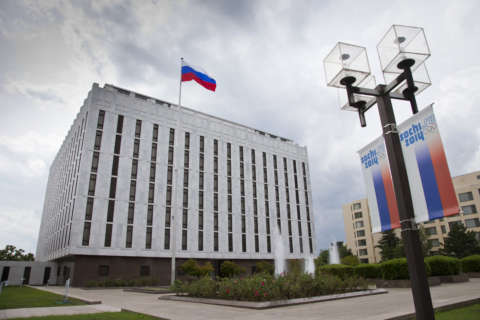 Not Putin up with it: DC Council wants street name change near Russian Embassy