Rats are a problem in D.C. and most major cities, but the District is unveiling its newest weapon in the war on rats: dry ice.
Listen now to WTOP News WTOP.com | Alexa | Google Home | WTOP App | 103.5 FM

WASHINGTON — Dry ice is the District’s newest weapon in the city’s war on rats.

Mayor Muriel Bowser and other city officials gathered in an alley near 12th and H Streets NE to watch a Department of Health worker carefully pack dry ice into a rat hole before covering the hole with dirt.

“The CO2 [carbon dioxide] that emanates from the dry ice suffocates the rats and their home becomes their grave,” said Gerard Brown, Program Manager of Rodent and Vector Control, DC Department of Health.

D.C.’s growing population, a rising number of restaurants and carelessness disposing of trash have contributed to the District’s rat problem.

“It comes down to managing our trash the right way, not having food waste that’s out in the alley,” said D.C. Councilmember Charles Allen of Ward 6. “It takes the partnership between residents and the city.” 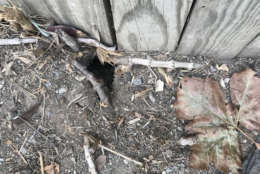 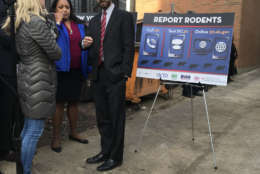 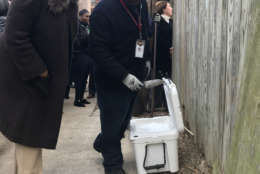 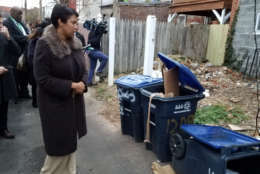 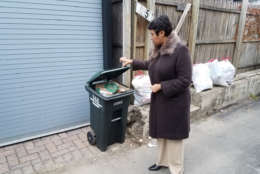 The mayor promised an untiring effort against rodents, but acknowledged it’s a big job.

“This has been tried in cities around the country,” said Tommy Wells, director of the Department of Energy and Environment. “It’s a lot cheaper to use dry ice than a lot of the different pesticides or poisons that are used.”

While the Department of Health will continue to rely on rat poison, it will include dry ice in its anti-rat toolbox.

The District is also encouraging residents to carefully use dry ice on rat burrows on their property.

“The main concern is that dry ice can burn you,” Wells said. “So you need to use appropriate insulated gloves or tongs.”