DC’s plan to handle traffic spike with opening of Wharf

The long awaited opening of The Wharf in D.C. will take place this week and the events to mark the occasion are expected to create a big spike in traffic in the area.
Listen now to WTOP News WTOP.com | Alexa | Google Home | WTOP App | 103.5 FM

WASHINGTON — The long awaited opening of The Wharf in D.C. will take place this week and the events to mark the occasion are expected to create a big spike in traffic in the area.

The District’s Department of Transportation has released its plan of action, to handle an expected 20,000 people a day for the opening week which goes from Thursday through Sunday.

Starting on Monday, DDOT plans to roll out signs which will warn Southwest commuters about what to expect and urge them to use alternate routes during the opening week.

The city also plans to have eight Traffic Control Officers on duty for the four days, with the goal of keeping cars and pedestrians moving in through the area.

In addition to Maine Avenue, other main throughways such as I-395 are expected to feel the impact, especially on Thursday night when the Foo Fighters open D.C.’s newest music venue, The Anthem.

“Delays will probably be comparable to Nationals traffic; when the Nat’s play during rush hour, traffic goes from bad to worse,” said WTOP Traffic’s Dave Dildine.

Dildine said the 9th Street tunnel, which is an important outbound route from downtown, ends at the Wharf, so Dildine believes that could be a tough ride during the opening. Dildine said the long-term impact on traffic from The Wharf remains relatively unknown.

People headed to The Wharf are encouraged to take public transportation.

To make space for ride share and taxi pickups, a portion of street side parking along Maine Avenue will be made unavailable. Uber and Lyft drivers will be able to meet riders on the South curb of Maine Avenue between Fish Market and 7th Street. A Taxi stand will be in place on the North curb from 7th Street through 9th Street.

Also on Thursday, The Potomac River Boat Company will begin Water Taxi service to the Wharf from Alexandria or Georgetown. 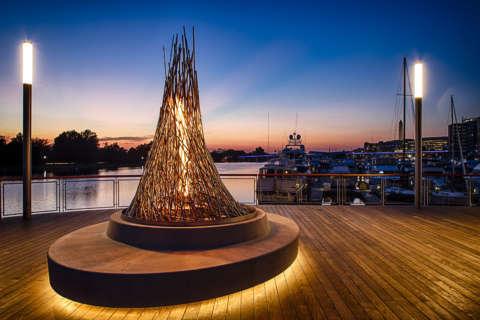