WASHINGTON — June 21 will mark one year since heavy rains dumped water down the escalator steps at the Cleveland Park Metro station.

Ahead of that one-year mark, the District Department of Transportation and residents gathered at nearby John Eaton Elementary School to hear what will be done to prevent a similar incident from taking place.

“We think there is just an accumulation of paved area in the drainage area, plus the combination of some intense storms, which overwhelmed the system,” said Paul Hoffman of DDOT. 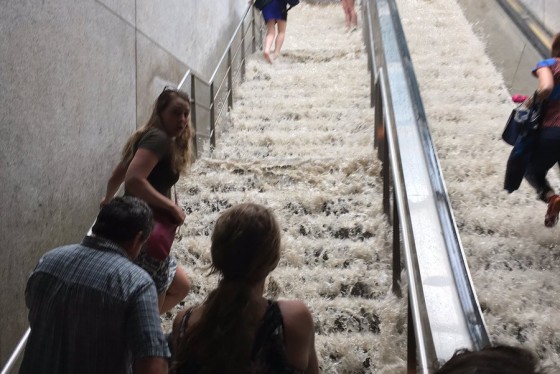 “As it just builds out and we keep paving and enlarging paved area, we’re paying the price down there in Cleveland Park,” Hoffman said.

The design for relieving the drainage system includes several new storm drains, as well as new piping that will ease the burden on the 1920s-era drains currently serving the area.

Planners are also considering an underground storage area, which will give stormwater a place to go after a heavy rain, Hoffman said.

In addition, Metro is looking to improve its infrastructure in the area, which would include raised vents for its Metro tunnel. The vents served as another way for floodwater to pour in last summer.

The design for better drainage was presented Thursday at the community meeting, as part of an overall neighborhood improvement plan to redesign the pedestrian area near the intersection of Connecticut Avenue and Porter Street.

“I just wanted to come and see what their plan was and whether or not it’s going to disrupt the parking that’s essential to my business,” said Celeste Elnaggar, who owns Parcel Plus.

Planners are soliciting the public’s input and ideas on how to improve not only drainage but also the streetscape of the neighborhood. Planners hope to get approval by early next year and begin construction shortly thereafter.

“I want 2017 to be the last wet summer for Cleveland Park, that if we’re going to have any more of these that this year is the last one,” Hoffman said.