WASHINGTON — Three people were arrested, and an arsenal of munitions and weapons were seized from a D.C. Housing Authority apartment in Southeast Saturday evening.

Dozens of police responded in a chaotic scene, which included a wreck between two D.C. police vehicles and nearby shots fired, as police made the arrests at Potomac Gardens in the 1200 block of I Street Southeast.

The officers in the crash received minor injuries.

Police said the incident began to unfold shortly after 6 p.m., when a D.C. Housing Authority Police officer saw a man who he recognized. Police said the man was under court order to stay away Potomac Gardens.

The man ran from the officer, prompting Housing Authority Police to summon D.C. police for backup.

Officer Hugh Carew, a spokesman for D.C. police, was unable to say exactly how many officers responded, why the incident drew dozens of police or what caused the crash of two police vehicles.

Police arrested three people, all of whom were under D.C. Superior Court orders to stay away from Potomac Gardens.

One of them was armed.

Police obtained a search warrant to one of the apartments at Potomac Gardens, where they uncovered a variety of munitions and weapons — including a semi-automatic handgun, a 12-gauge shotgun and more than 200 rounds of ammunition.

After the arrests were made, about six shots were fired from an unknown suspect in the 1200 block of G Street Southeast.

The three suspects have been charged with unlawful entry and contempt of court; one person has been additionally charged with possession of unregistered ammunition. 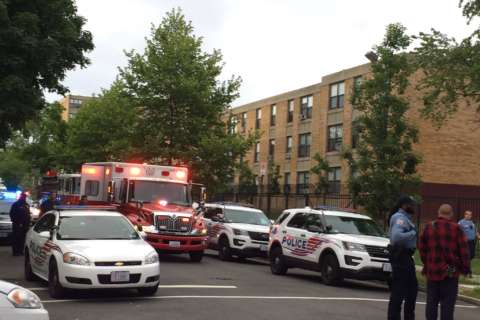