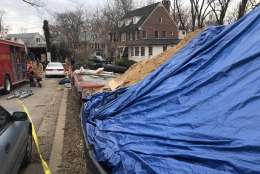 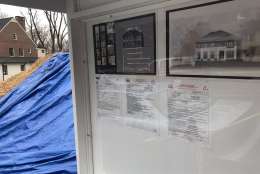 WASHINGTON — A construction worker was killed after a trench collapsed off Foxhall Road in D.C. on Tuesday.

The man was trapped up to his legs on a site in the 4600 block of Dexter Street, in Northwest, Tuesday morning in what D.C. Fire and EMS officials described as an “unstable environment.” Shortly before 1 p.m., fire officials announced the man had died.

Crews were called to the 4600 block of Dexter Street about 10 a.m. for the collapse and were working to shore up the area in order to pull the man free. Fire officials said the man’s co-workers were trying to dig him out, but that firefighters had to physically remove them for their own safety.

Images of the rescue scene shared by D.C. Fire show a construction site for a building, with a large mound of dirt sitting on a steep slope.

One neighbor, Deb Fallows, told WTOP that the lot had been empty since the 1980s, and that other efforts to develop the site were unsuccessful because of the sloping terrain. The construction site is about 20 to 30 feet below street level.

WTOP’s Megan Cloherty and John Domen contributed to this report.