WASHINGTON — Hidden-camera video of activists planning to use stink bombs to disrupt inauguration events of President Donald Trump has led to a man’s arrest.

Scott Ryan Charney, 34, was arrested Jan. 19, hours before the DeploraBall for Trump supporters, held at the National Press Club. He is charged with conspiracy to commit assault, a misdemeanor.

Charney appeared on video secretly recorded by Project Veritas, a conservative group that has conducted undercover stings targeting liberal groups in the past decade. A man wearing a hidden camera infiltrated the planning session of the activists and recorded their conversation.

According to court documents, Charney and two other men held a meeting with the infiltrator at the Comet Ping Pong pizza restaurant on Connecticut Avenue in Northwest.

The activists were members of the D.C. Antifascist Coalition, working under the umbrella of the DisruptJ20 protest group, police said. The men planned to activate the press club’s sprinkler system and deploy Butyric acid near the building’s air ducts.

In the Project Veritas video,  Charney and the two other men discuss how to disrupt the DeploraBall.

Police said a member of the group had purchased a ticket for the event, planning to smuggle Butyric acid into the press club in a purse or container.

The plan was to “deploy Butyric acide near the air ducts and/or deploy bottles of Butyric acid on the floor in order to cause the ball attendees to evacuate the building as a result of the smell,” according to the court document.

Charney had scoped out the press club in December and emailed the other participants to say he believed they could accomplish their goals “with no negative consequences for our side, nor any collateral damage,” police wrote in the document.

Charney was arrested Jan. 19, in Northwest D.C. hours before the DeploraBall. Police said he had been using an alias in dealings with the infiltrator.

As Trump was sworn in as the 45th president, Charney was making his first court appearance in D.C. Superior Court, where he pleaded not guilty. He was ordered to stay away from the inauguration zone until the activities were completed.

Project Veritas, founded by James O’Keefe, attempts to “investigate and expose corruption, dishonest, self-dealing waste, fraud and other misconduct in both public and private institutes in order to achieve a more ethical and transparent society.”

A D.C. police source said the agency was unaware of the plot before seeing the Project Veritas video.

While O’Keefe’s videos have been criticized for selective editing, he has said his work is journalism.

O’Keefe was sentenced to three years of probation in 2010 after pleading guilty to a misdemeanor for tampering with phone lines at Sen. Mary Landrieu’s (D-La.) office. O’Keefe said his group was investigating allegations that Landrieu was ignoring constituent calls.

A media spokesperson for Project Veritas did not immediately respond to a request for comment.

Lacy MacAuley, a spokesperson for the DisruptJ20 group, told WTOP she expects Charney “will be found innocent of this ridiculous charge.”

“I cannot stress enough how false this video was,” MacAuley wrote in an email.

MacAuley said the infiltrator, who Charney and the two other men involved in the Comet Ping Pong meeting knew as “Tyler,” was not convincing in his role.

“I saw him with my own eyes, and I can tell you he definitely stuck out like a sore thumb — a kid with a North Carolina country accent and a vague back story,” MacAuley said. “They knew he was false, so they gave him a false plot.”

“Scott has never been arrested before, and is a bit rattled by the experience,” MacAuley said. “I’ve known him for years, and I can tell you that he is no dangerous terrorist.”

The meeting at Comet Ping Pong was a joke, MacAuley said.

“Because they thought it would be a humorous venue, they arranged to meet with Tyler at Comet Ping Pong, which has recently been targeted by right-wing fake news outlets,” she said.

Police would not discuss whether Butyric acid was obtained to carry out the discussed attack.

“The fact that the FBI and D.C. Metropolitan Police would act upon a video handed to them by a known news-spinner, convicted criminal and huckster shows that the fake news spin zone is falling to new lows,” MacAuley said.

Charney’s next court appearance is scheduled for Feb. 3.

Watch the Project Veritas video, which was released days before the Jan. 19 “DeploraBall.” It contains graphic language. 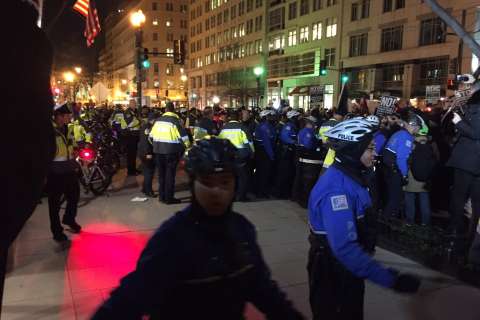