Members of military, their families get 2nd Thanksgiving in DC 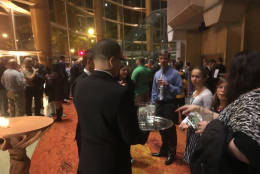 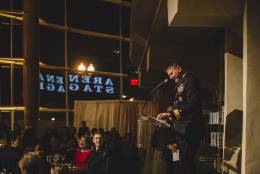 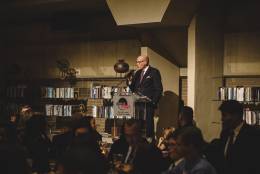 WASHINGTON — A day after Thanksgiving, 200 members of the U.S. armed forces and their families gathered for a second round of food with some added entertainment at Arena Stage in Southwest D.C.

“This is really an amazing event, and it has become a tradition here in Washington,” said Rear Adm. Charles Rock, the 90th commandant of Naval District Washington.

Attendees began the night with cocktails and music performed by several military musicians.

Arena Stage Executive Director Edgar Dobie said the event was a chance to show area service members how much the D.C. theater values its military neighbors.

“It’s not lost on any of us here at Arena Stage that the freedoms that we enjoy, in terms of the stories we can tell and the way we can gather the community, is due in large part to the fact that we have a volunteer army, we have volunteer services, and they really protect and make meaningful those freedoms,” Dobie said.

“Just having this opportunity to participate in this experience — it’s just very generous of them,” said Air Force Staff Sgt. Deborah Foy.

The invited guests were also treated to a free three-course dinner, which was followed by an exclusive performance of the Rodgers and Hammerstein musical “Carousel.”

For Air Force Master Sgt. Thomas Trout, this is his second year attending what he calls an “enjoyable” event with his family.

“Yeah, another Thanksgiving!” is what Trout’s son, Wesley, said about the event.