WASHINGTON — Investigators believe the operator of a food truck that burst into flames Wednesday afternoon near the George Washington University campus had improperly refueled a gas-powered generator while the truck was serving customers shortly before the fire started.

The operator and two women inside the truck were all injured in the blaze. One of the victims suffered critical injuries, according to D.C. Fire and EMS.

Regulations published by D.C. Fire and EMS forbid food trucks from refueling generators while they are open to the public.

Investigators have been combing through the charred remains of the “Falafel Bus” and reviewing surveillance video from campus security cameras that appeared to show the food truck operator improperly refueling the generator. The Bureau of Alcohol, Tobacco, Firearms and Explosives assisted in the investigation.

There is no indication of faulty equipment, and the truck was up to date on its inspections, D.C. Fire spokesman Doug Buchanan told WTOP. Food trucks in D.C. that use propane are inspected annually by the fire marshal.

Investigators believe the fuel ignited after it came into contact with the “incredibly hot” generator, Buchanan said.

There are about 275 registered food trucks in D.C., according to the D.C. Maryland and Virginia Food Truck Association.

The Falafel Bus food truck is registered to Naceur Negra, of D.C., according to licensing records maintained by the Department of Consumer and Regulatory Affairs.

Najiba Hlemi, executive director of the association, said the vending industry in D.C. is still fairly new but that, nationwide, fires are rare.

“Sometimes you have players who try to take shortcuts. The players don’t know that these shortcuts could cause safety issues,” Hlemi told WTOP in a phone interview before fire investigators had released the cause of the blaze. 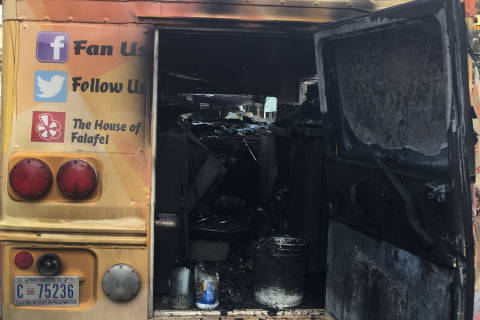