Development is moving along at The Wharf — a $2 billion, mile-long development along the Potomac River on Maine Avenue that will include dining, entertainment, residential, retail and office space.
Listen now to WTOP News WTOP.com | Alexa | Google Home | WTOP App | 103.5 FM
(1/5) 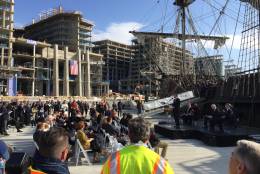 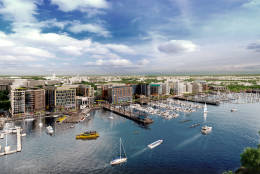 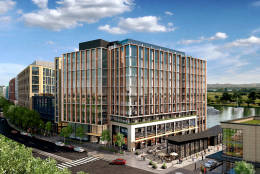 WASHINGTON — A forest of construction cranes along the Southwest D.C. skyline is beginning to be replaced by a project that promises to spark a renaissance along the city’s waterfront.

The Wharf is a $2 billion, mile-long development along the Potomac River on Maine Avenue that will include dining, entertainment, residential, retail and office space.

“Washington, D.C., is a waterfront city, but we don’t really behave that way. I think we’re going to change that paradigm,” said P.N. Hoffman CEO Monty Hoffman, who is a co-developer of The Wharf.

While it is a mixed-use project, Hoffman prefers to call the development a neighborhood community because it will offer a plethora of open public spaces, promenades, piers, docks and activities. At Transit Pier for example, there’ll be ice skating in the winter and a farmers markets in the summer.

The first phase of The Wharf will extend along Maine Avenue from roughly Interstate 395 to 7th Street in Southwest. Phase two, being planned now, will continue another half mile to Fort McNair.

“The grand opening for the first phase of The Wharf is October 2017,” Amer Hammour, Chairman of Madison Marquette, who is a co-developer of The Wharf, said in an email. “However, many of the restaurant and hospitality elements will have their soft opening a few weeks in advance of the public grand opening.”

When it opens, The Wharf will be accessible by land and by water.

By land, the L’Enfant Plaza transportation hub is nearby. Also, there’ll be parking above and below ground, and The Wharf will host the District Wharf water taxi stop.

The launch of a regional water taxi system will coincide with the opening of phase one of The Wharf.  Water taxis will connect waterfronts in the District, Alexandria, Virginia and National Harbor, Maryland.

Recreational boats also will be welcome.

“We have docks out here, almost like a boat parking lot,” Hoffman said of Market Pier.

The Market Pier parking area for visiting boats is at the Maine Avenue Fish Market where boats house businesses such as Captain White’s Seafood City and Jessie Taylor Seafood.

The Fish Market is one of the oldest open-air seafood markets in the United States.