WASHINGTON — D.C. Council passed the “death with dignity” bill Tuesday, sending it to the mayor for final approval.

The bill would allow terminally ill patients over 18 years old, with six months or fewer to live to request lethal medication from their doctors.

The council voted 11-2 to pass the measure with council members Brianne Nadeau, Ward 1, and Yvette Alexander, Ward 7, voting against it.

In it’s first reading Nov. 1, some council members expressed the difficulty they were having personally in supporting the legislation. Council member Kenyan McDuffie, Ward 5, was brought to tears recounting his father’s final days and remarked that it was “by far my toughest vote in the four- and-a-half years on this body,” he said.

Alexander added an amendment ahead of the final vote in the Council of the Whole, which requires the Department of Health to publish a statistical report annually based on a sample of information doctors provide, including patients’ diagnoses, prognoses and when they requested the medication.

The bill’s sponsor, council member Mary Cheh, Ward 3, touted the protections in the bill that require specific amounts of time to elapse during the process to prevent coercion of ill residents by a third party to end their lives.

“The bill allows the final exercise of control and to deny it is simply to prolong the process of death. To prolong suffering is to rob a person of autonomy. In this context, the injunction to do no harm really means to respect a dying person’s peace,” she said during the bill’s first reading.

The bill now goes to Mayor Muriel Bowser’s desk, where she is expected to allow it to pass into law. 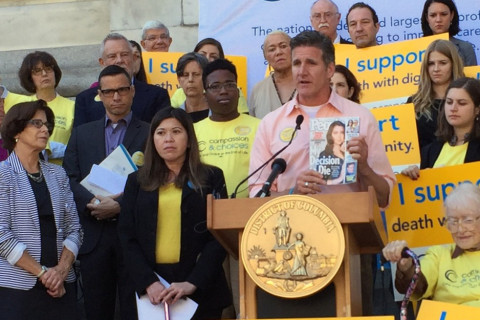 Supporters push for death with dignity bill in DC