A group of protesters gathered Monday morning at 3rd and M Streets in Northwest to call for transparency following a deadly police shooting that occurred near the intersection two weeks ago.
Listen now to WTOP News WTOP.com | Alexa | Google Home | WTOP App | 103.5 FM

WASHINGTON — A group of protesters gathered Monday morning at 3rd and M Streets in Northwest to call for transparency following a deadly police shooting that occurred near the intersection two weeks ago.

Protesters went into the street and stopped traffic on New York Avenue for a short period of time during the morning rush. Police diverted traffic around them and it caused backups in the area.

“I know that there’s great officers, but these bad cops are putting a bad name on them,” said demonstrator Jerry Swanson.

The city has not released their names.

“There needs to be transparency, at least to the family,” Swanson said.

“Police in D.C. have to be accountable,” said April Goggans, an organizer with Black Lives Matter DC. “We want the names of the officers and we want them fired immediately.”

Protesters also want to know more about why the officer who fired his weapon did not have his body camera turned on. Investigators have said the body camera was activated only after the shooting took place.

“Our preliminary review does not show any camera footage before the shooting,” said D.C. Mayor Muriel Bowser. “The footage that we have reviewed at this point happens after the shooting incident.”

What footage exists has been turned over to the U.S. attorney’s office for the investigation, officials said.

The shooting led to a change in the department’s body camera policy. When police respond to a call or have an interaction with citizens, they must now confirm with dispatchers that they have their body cameras turned on. 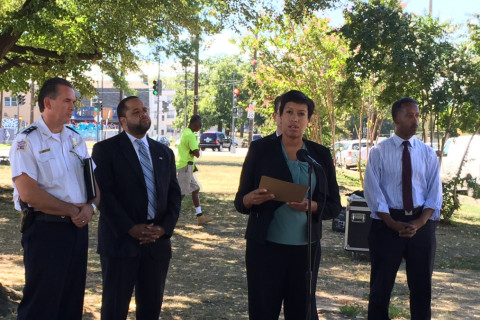