American University’s president said Monday that recent reports of possible harassment aimed at black students on campus are disappointing and that the university will be hosting events that will address the problem.
Listen now to WTOP News WTOP.com | Alexa | Google Home | WTOP App | 103.5 FM

WASHINGTON — American University’s president said Monday that recent reports of “racist expressions” aimed at black students on campus are disappointing and that the university will be hosting events that will address the problem.

Earlier this month, reports surfaced of an incident directed a two black students in a university dorm. On Sept. 8, a black woman said someone threw a banana at her while she was in her dorm room and another black woman said she found a rotten banana outside her door, along with obscene drawings on the whiteboard attached to her door.

The incidents have left the black students “shaken, upset, and even feeling unsafe,” American University President Neil Kerwin said in a statement Monday.

“We will confront racist expressions with forceful condemnation and respond to discrimination with every tool at our disposal,” Kerwin said in the statement. “It is incumbent on the university to respond clearly and to educate those who cause harm with their insensitivity and ignorance.”

Earlier this week, Kelly Alexander, public relations director at American University, said there was not enough evidence to characterize the incident as bias-related.

In the weeks to come, the university will be hosting a series of events to address expectations and concerns and help create a more “inclusive climate.”

The school held a town hall Friday to give the students a place to discuss the issues.

Students hosted a protest at the school Monday and called on the university to do more to address the problem of racism.

“Despite the efforts we have begun, there is still a great deal more to do. Given the events we have seen across our country in recent months, this work will continue for the foreseeable future,” Kerwin said. 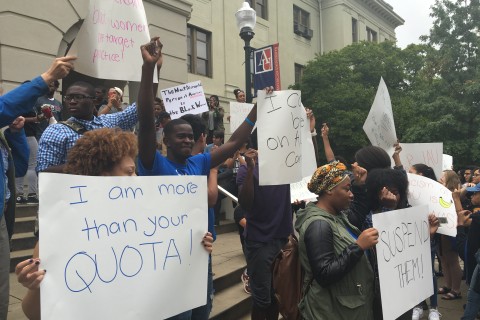 American University: Dorm incident not being treated as ‘bias-related’