WASHINGTON — The U.S. Coast Guard is still trying to determine the source of a mysterious oil sheen drifting atop the Potomac River, near the Ronald Reagan Washington National Airport.

Several people called the Coast Guard, in Baltimore, about it on Wednesday.

Ruhlig said it’s common for oil sheens to appear after big snow melts, but the area covered by this sheen is under investigation. It impacted waters stretching from an area known as Roaches Run, going as far south as the Woodrow Wilson Bridge.

The substance is taking a toll on area wildlife. Since its discovery, 18 geese have been found covered in oil and are being treated by wildlife experts, Ruhlig said.

“Fish and birds are the main concern so far,” said Tommy Wells, director of the District Department of Energy and the Environment.

Wells asked members of the public to keep an eye out for wildlife covered in oil. People should call 311 if they spot animals in distress in D.C.

So far, there’s no indication that there is a public safety risk, but scientists plan to monitor the waters as the cleanup takes place.

“Our primary focus is on getting the oil that we do see, out of the water,” Ruhlig said.

Cleanup crews have been hired and will use several methods to remove the oil from the river. So far, Ruhlig said an investigation will determine if someone should be held responsible for the pollution.

The Coast Guard couldn’t give a timetable for cleaning up the oil, but Ruhlig said it could take a while. 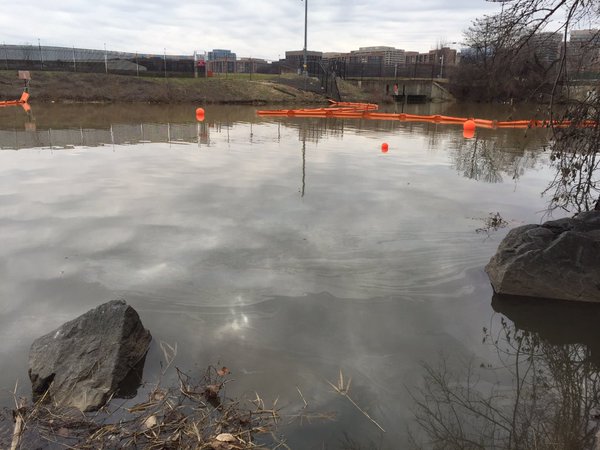