“Just this year, we’ve seen 24 fatalities related to traffic,” Bowser said at a news conference debut of the Vision Zero Initiative, which has the goal of zero fatalities and serious injuries by 2024.

The plan includes education campaigns on the rules of the road, stiffer penalties and enforcement of violations by drivers, walkers and cyclists, data analysis for targeted responses and street design adjustments.

Some traffic engineering changes can be made fairly quickly, such as adjusting signal timing to allow walkers to begin to advance across an intersection before cars are green-lighted to proceed.

Another quick fix resolves an issue created by Pierre Charles L’Enfant‘s layout of D.C. streets in 1791, which can prove awkward for modern moves of travel.

“We hear from people [saying], ‘hey you know, Maryland Avenue is not a highway, we live here, slow down,” Bowser said.

Speeding drivers are the top safety concern of city residents, according to an executive summary of the action plan. Other concerns are distracted drivers and people who ignore traffic signals. 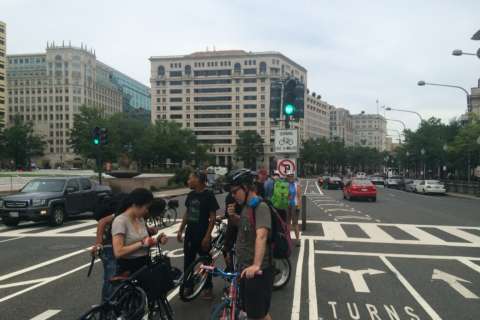