“Use Ruby's life as a constant reminder of safety within our community. Let her life be a light in this community,” a fellow churchgoer says.
Listen now to WTOP News WTOP.com | Alexa | Google Home | WTOP App | 103.5 FM
(1/2) 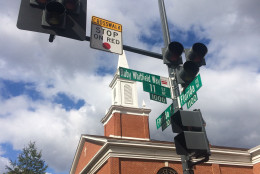 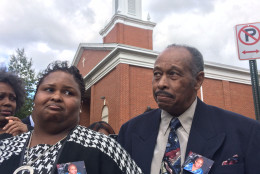 WASHINGTON — Ruby Whitfield was leaving New Samaritan Baptist Church when she was struck and killed by a hit-and-run driver in 2013. On Sunday, congregants remembered the beloved churchgoer in an unusual way, and they offered prayers for traffic safety in the busy city.

During a sun-filled ceremony on Florida Avenue at 11th Street Northeast, the spot where Whitfield was killed, the faithful unveiled an official green-and-white D.C. street sign, officially signifying that portion of 11th street as Ruby Whitfield Way.

“Use Ruby’s life as a constant reminder of safety within our community,” said Shawntika White, a D.C. resident and member of the New Samaritan church, as she prayed. “Let her life be a light in this community.”

The congregation has a history of problems with traffic on Florida Avenue, where traffic moves swiftly past the church. In 2003, church member Barbara Hinton, of Bowie, Maryland, was struck and injured while trying to cross the street. “I was actually crossing at 10th Street and the truck dragged me to the front of the church,” Hinton said.

In response to the church’s request for traffic calming on Florida Avenue, the city has repainted the crosswalk, and installed a speed camera and pedestrian-activated arrays of yellow lights to warn motorists that pedestrians are entering the walkway.

“I must admit, there’s been a lot of progress since 2003 and even since Ms. Whitfield sacrificed her life,” Hinton said.

Congregants clapped and cheered as Bishop Michael Kelsey drew back the covering, exposing the new street sign. He said it was a tender and triumphant moment.

“It certainly reminds us of the untimely loss of one who was dearly beloved by family and friends, church and community,” Kelsey said.

But congregants said it would take more than prayers and traffic signals to ensure that motorists drive responsibly and take extra care around walkers, bicyclists and others.

“It’s really going to take the community to understand that we have to drive safer,” White said. 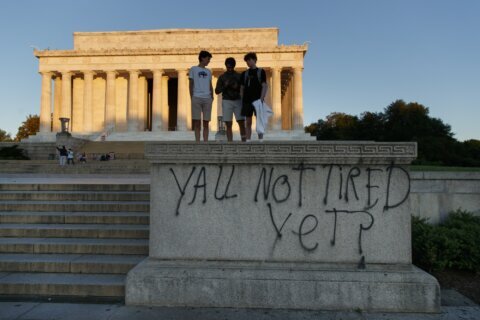