WASHINGTON — It may be a season late and a sled short, but Congress says sledding is now OK on Capitol…
Listen now to WTOP News WTOP.com | Alexa | Google Home | WTOP App | 103.5 FM

WASHINGTON — It may be a season late and a sled short, but Congress says sledding is now OK on Capitol Hill.

Del. Eleanor Holmes Norton, D- D.C., says the ban is now lifted thanks to constituents putting their sleds down, so to speak. The bill passed the U.S. House of Representatives Tuesday evening.

The bill ends the sledding ban on Capitol Hill by telling the Capitol Police not to enforce regulations that prohibit the activity.

The ban on sledding had been around for a long time, but this past winter marked the first time in many years the ban had been enforced.

“When the Capitol Police saw that our kids and our families were determined to sled, they withheld enforcing the law so all I had to do was say, ‘See it worked,'” Holmes-Norton said Wednesday.

Just three months ago, on a 30 degree, windy day, there were nearly 5 inches of snow on the ground and Lyndsey Medsker was enjoying some snow-day activism with her boys.

Medsker joined other parents in organizing the sled-in that was covered nationally because of the reasoning behind the ban and the grass roots effort to fight it.

“Sledding is not a national security issue. No one is harming anything,” Medsker said.

Norton says it’s ironic on a 90-degree day, the bill lifting the ban passed for a winter win.

“Bear in mind, it’s called Capitol Hill for a reason and the reason is this magnificent hill we ought to be making use of,” she says. 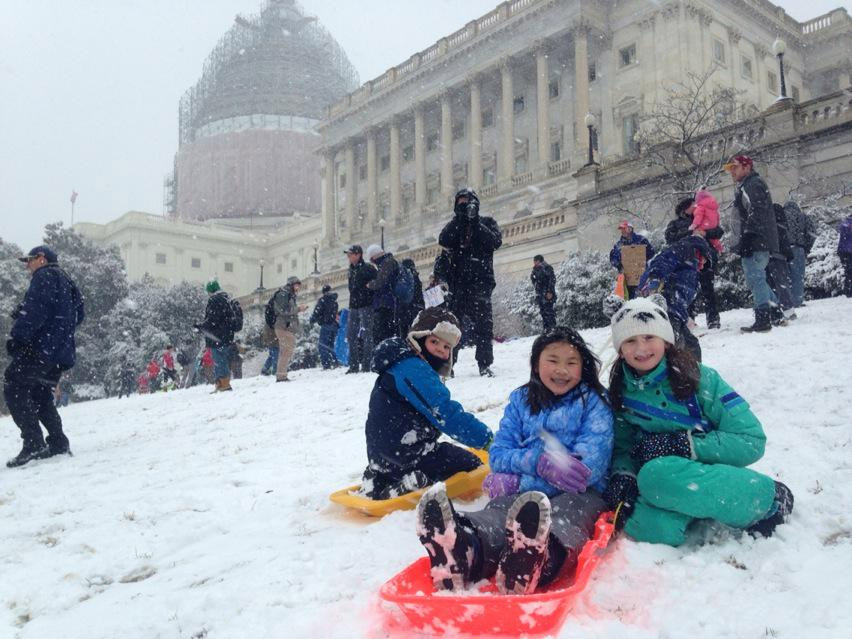 Bill to bring sledding back to Capitol Hill advances Families flock to Capitol Hill for sledding, in protest of ban