Group hopes to advertise on Metro with images of Muhammad

WASHINGTON – A controversial group is hoping to post advertisements on the D.C. Metro system that feature a cartoon image of Islam’s prophet Muhammad.

The American Freedom Defense Initiative is the same group that hosted a Muhammad cartoon contest in Garland, Texas earlier this month. Two gunmen opened fire at the event before they were killed by security.

“Freedom of speech is under violent assault,” the group’s president Pamela Geller told WTOP. “We have to stand up against violent intimidation.”

Geller’s group submitted an ad to Metro that shows the winning cartoon from the Texas contest.

It would be posted at the Foggy Bottom, Capitol South, Bethesda, L’Enfant Plaza and Shady Grove Metro stations. The ad would also be plastered on Metro buses.

“Either America will stand against attempts to suppress the freedom of speech by violence, or we will submit and give the violent the signal that we can be silenced by threats,” Geller says.

A spokesperson for Metro issued a statement to WTOP saying the ad hasn’t yet been approved, but is being reviewed. 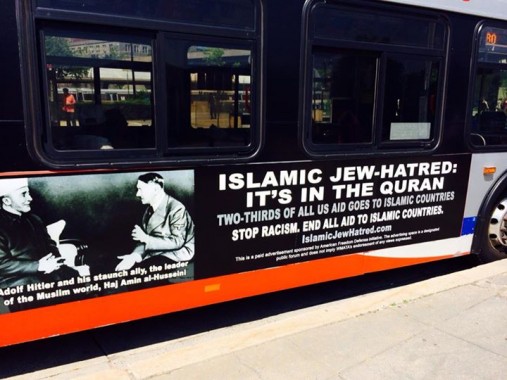