WASHINGTON — The Newseum is displaying the defiant new issue of the Parisian satirical newspaper Charlie Hebdo.

As millions of copies of the issue sold out before dawn Wednesday in Paris, it went on display in front of the journalism museum in Washington, D.C.

CNBC reports copies of the magazine have already appeared on eBay, selling for 100,000 euros ($117,839) after the initial print run sold out.

The issue, which depicts a tearful Prophet Muhammad, joins 80 issues of newspaper front pages from around the world printed for public display every day outside the Newseum.

On the cover, the Prophet Muhammad is seen with the words, “All is Forgiven,” written in French above his head.

“There is a reaction by some who say it is an insult and shouldn’t be published because it’s blasphemy,” explains Newseum spokesman Gene Policinski.

According to Policinski, the goal of the Newseum was not to provoke or offend.

“I think people will distinguish between an intention to insult and just conveying the news to people who need to see it,” he says.

The cover of the Charlie Hebdo issue is on display, outside, along busy Pennsylvania Avenue.

The core of the Charlie Hebdo staff was killed a week ago when gunmen stormed its offices, killing 12 people and igniting three days of bloodshed around Paris. The attacks ended Friday when security forces killed all three gunmen involved.

The new issue of Charlie Hebdo was put out by surviving employees working in borrowed offices.

The front pages display at the Newseum is changed out every morning, says Policinski. 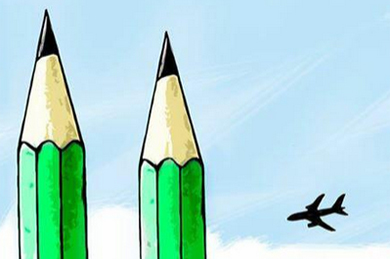