There will be no rail service between Rosslyn and Foggy Bottom Metro stations on the Blue Line on Wednesday, as Metro continues to investigate a derailment that left riders stranded during the Tuesday afternoon rush.
Listen now to WTOP News WTOP.com | Alexa | Google Home | WTOP App | 103.5 FM

There will be no rail service between Rosslyn and Foggy Bottom Metro stations on the Blue Line Wednesday, as Metro continues to investigate a derailment that left several riders stranded during the Tuesday afternoon rush.

The derailment happened Tuesday just before 5 p.m. on a Blue Line train heading toward the Franconia-Springfield station. Metro received a report of a disabled Blue Line train in the tunnel between Rosslyn and Arlington Cemetery stations. An inspection found that a 7000-series train had partially derailed.

Arlington County Fire/EMS and Metro personnel responded to the scene and evacuated those on board.

Initially, there were no reported injuries, but Arlington Fire and EMS said around 8 p.m. Tuesday that one person was taken from the scene to a hospital in “stable condition.”

Train service was suspended between Foggy Bottom and Pentagon stations, and shuttle buses were requested Tuesday afternoon and evening.

Mayra Rivera, of Prince George’s County, Maryland, was on the train between Rosslyn and Arlington Cemetery when she said she saw smoke coming out all of a sudden.

“It wasn’t a lot of smoke. It was just a little bit of smoke. They were trying to get it running, but it just kept stopping,” she said.

Rivera said she heard that the train was malfunctioning, and people were transferred to the car that she was sitting.

Rivera said passengers were escorted in groups of 25 to walk about a quarter-mile from where the train was stuck to Arlington National Cemetery.

The National Transportation Safety Board said in a tweet that it will investigate the derailment. Its investigators will coordinate with WMATA and the Washington Metrorail Safety Commission as part of its investigation. 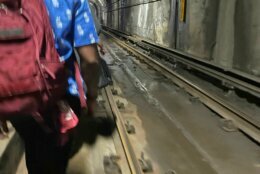 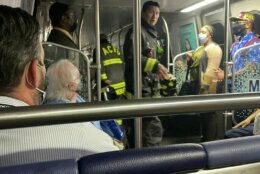 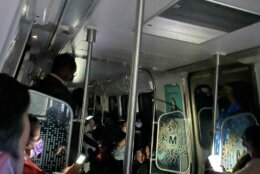