More people are paying tolls on Interstate 66 inside the Beltway, even as rush hour travel speeds have slowed compared with a year earlier.

The latest data from the Virginia Department of Transportation — covering April, May and June — show slightly more drivers used the road in spring 2019 than spring 2018 during HOV or toll hours.

The majority of that increase in usage was by drivers paying tolls, which might have helped drive the average toll price paid down from $8.83 to $8.20 eastbound in the morning and from $5.11 to $4.89 westbound in the afternoon.

Tolls have also been lowered in part by lowering the target speed by which tolls are calculated, which is especially important given ongoing delays from construction on an eastbound widening project.

Still, there was a significant increase in the number of trips that cost more than $40.

It follows a similar increase in the winter months.

Even drivers paying less than $40, or who would otherwise qualify for a free ride with a second person in the car and an E-ZPass Flex, are facing extra fees. 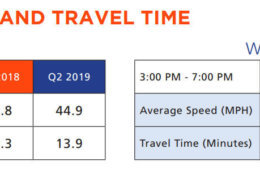 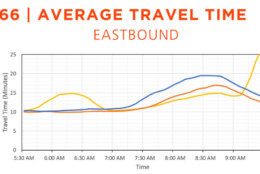 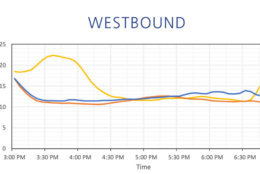 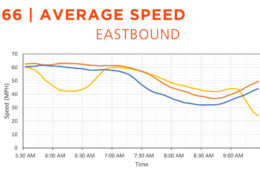 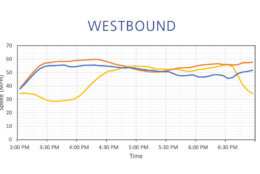 Traffic in the morning was worse this spring than last spring, and worse on average than in spring 2017, before tolling rules for solo drivers during expanded HOV hours began.

The expanded hours continue to have the biggest impact on traffic jams, with higher speeds on I-66 during the times that HOV rules did not apply before, but lower speeds during most of the time HOV rules have always applied.

VDOT blames construction on an additional lane in the Falls Church area for 8% to 14% slower speeds.

The biggest slowdowns are around 8:30 a.m.

In total, an average of 15,309 drivers went eastbound on I-66 inside the Beltway each day this spring, compared with 15,068 last spring.

In the afternoon, traffic was slower this spring than last, but average speeds remained higher over the entire new four-hour HOV or toll period than before the hours expansion.

This spring, average westbound trips took 12.6 minutes, compared with 11.7 minutes a year earlier. In 2017, before tolling, the average travel time was 14.9 minutes.

The pre-tolling average includes the significant slowdowns before and after old HOV rules started. During the old hours, travel times are similar or slightly slower now than in the past.

Tolling inside the Beltway at rush hour only, and only in the peak direction, is separate from the two HOV or toll lanes each way under construction outside the Beltway that are scheduled to open in about three years.

On the George Washington Parkway, speeds were slower in both directions this year than either of the last two years.

The changes are not solely due to I-66 HOV and tolling rules, but are also linked to other traffic issues like the sinkhole on the G.W. Parkway and continued growth in the amount of driving in the D.C. area.