Repairs to damaged section of GW Parkway to last through August

The long-term repairs will keep the right lane on the GW Parkway closed for at least 10 weeks once the contractor is ready for work, the National Park Service said Friday.
Listen now to WTOP News WTOP.com | Alexa | Google Home | WTOP App | 103.5 FM

The repairs to a crumbling section of the George Washington Parkway between Turkey Run Park and the Capital Beltway are now expected to continue through most of the summer.

The long-term repairs to a failed drainage inlet will keep at least one right lane on the parkway closed for 10 weeks once the contractor is ready for work, the National Park Service said Friday. Engineers have determined that a 60 year old brick drainage structure buried deep under the parkway needs to be replaced.

A spokesperson for the agency said their contractor should be mobilized by late June.

That would mean that the repairs could last through late August, if not longer.

The bottleneck caused by the work zone has caused daily backups between Route 123 and the Beltway.

The sinkhole marks the second time in less than two months that part of the road collapsed in the same area. Damage caused by the failing inlet was discovered when a sinkhole opened last March, followed by a subsequent collapse and closure in mid-May.

The most recent 10-feet deep, 30-feet long and 20-feet wide sinkhole at a drainage inlet near Dead Run was stabilized and backfilled after the second failure, the park service said.

The National Park Service has coordinated with Federal Highway Administration engineers to design a long-term fix. Plans for a more permanent solution that would prevent yet another collapse involved a subterranean inspection using a robotic camera.

The park service has said the extensive fixes could require complete closures of the northbound lanes, and even one southbound lane, of the parkway. Those closures would be announced in advance.

Following heavy rain, high-standing water rendered one of the southbound lanes impassable for a time across from the worksite early Thursday.

A planned $150 million overhaul of the GW Parkway between Rosslyn and the Beltway is moving forward but has yet to be fully funded. 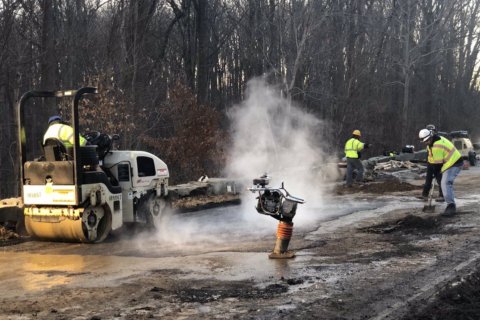 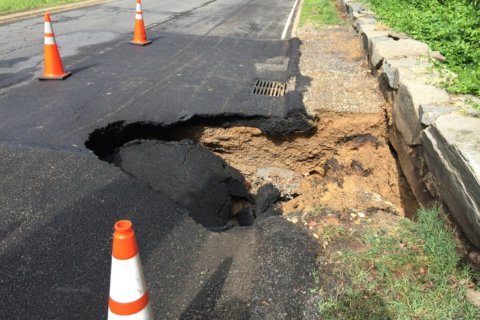