Metro has refunded more than 70,000 rush-hour rail fares in the first three months of its “Rush Hour Promise,” but has only provided 185 refunds to delayed bus riders, according to data compiled by WTOP.
Listen now to WTOP News WTOP.com | Alexa | Google Home | WTOP App | 103.5 FM

WASHINGTON — Metro has refunded more than 70,000 rush-hour rail fares in the first three months of its “Rush Hour Promise” program, but has only provided 185 refunds to delayed bus riders, according to data compiled by WTOP.

The “Rush Hour Promise” program, meant to boost rush-hour ridership and build Metro’s ability to directly contact customers as part of the agency’s broader focus on people with 9-to-5 jobs who may have the choice between driving to work or taking the train, has provided 71,106 refunds to rail riders since Jan. 26.

While those refunds (or partial refunds, in the case of riders with weekly or monthly passes) are automatic for significantly delayed riders who have registered their cards online with their personal information, refunds for bus riders with registered cards are much more restricted and require that the rider submits an online form.

The result is that 0.26 percent of all refunds issued so far have gone to bus riders – 185 “Rush Hour Promise” credits total were refunded to bus riders through April 20, according to Metro spokesperson Sherri Ly – while 99.74 percent have gone to rail riders.

Multiple bus riders who have submitted the request form but have not gotten refunds told WTOP they have not received any response after submitting the request beyond an immediate emailed notice that the form had been submitted.

In order to qualify for a refund for a rush-hour bus trip under the program, the delay of more than 15 minutes beyond the longest possible scheduled trip at that time of day must be “within Metro’s control,” and the rider must have previously registered his or her SmarTrip.

The program’s terms state that “the Rush Hour Promise does not apply to trips delayed by traffic, weather, or factors outside of Metro’s control.”

Examples of what would qualify for a refund are: delays due to a bus breakdown, a bus trip not running at all or a crash when a rider is on a bus where the bus driver is determined to be at fault.

Metro did not grant refunds to any riders who were delayed over the course of several weeks due to 164 buses being removed from service over safety concerns. Those buses returned to the road on Monday after investigators failed to find the cause of unexpected bus shutoffs.

While the refunds for rail riders are based on the cost of the trip depending on recent fare averages, Metro has spent roughly $200,000 in refunds over the first three months of the “Rush Hour Promise” program.

Metro believes the program and related advertising efforts are encouraging riders who have had one bad trip to stick with the system rather than switch to another way of commuting.

Riders who have not registered their SmarTrip cards with Metro by providing personal information online do not qualify for these refunds. Riders are also limited to four refunds each month, and must use their card again within 30 days after the refund is issued in order to get the credit.

Rail riders also do not qualify for refunds when rush-hour track work is announced in advance.

The lowest performing weekday for the rail system since the rush-hour refunds began was last Tuesday, April 17, when smoke reported on the Red Line during the morning rush caused major disruptions.

A total of 20,634 riders, or 3.1 percent of all trips that day, qualified for a refund because they arrived 15 minutes late or more at the station where they exited the system and also had a registered SmarTrip card, Metro said. For the entire day, 17.1 percent of all riders arrived late.

That was one of 16 days that Metro has provided more than 1,000 refunds, including five days where significant rush-hour problems led to more than 7,000 refunds in a single day.

During the period, Metro has counted between 82.9 percent and 93.4 percent of all trips as on-time on every given weekday, including trips outside of rush hour.

Metro’s metrics make it much easier for off-hours trips to be counted as on time, because the measurement adds time to enter and exit stations, get to and from the platform and to wait the maximum scheduled amount of time for a train to the actual travel time.

At the height of rush hour, Metro now schedules each line every 8 minutes. At other times of day, trains can be scheduled from every 12 minutes to up to 20 minutes apart.

For trips with transfers, the on-time measurement also includes the maximum scheduled wait at that time of day for the second train and the time it could take to get from one platform to another.

Want a refund from Metro for delays? What riders need to know

How many Metro riders got refunds on first day of ‘Rush Hour Promise’? 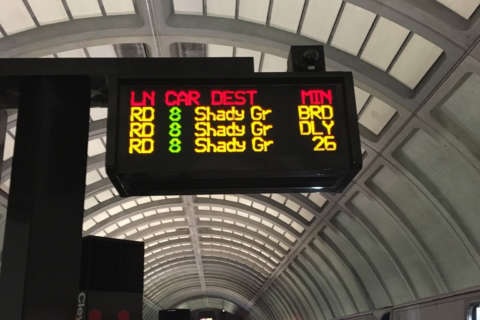