New tolls and HOV rules begin on Interstate 66 inside the Beltway in about two months, but there is no surefire way to know where tolls will need to be set to keep traffic moving until the tolling actually begins, a Virginia official says.
Listen now to WTOP News WTOP.com | Alexa | Google Home | WTOP App | 103.5 FM

FAIRFAX, Va. — New tolls and HOV rules begin on Interstate 66 inside the Beltway in about two months, but, because the system mirrors the Express Lanes elsewhere in the region, there is no set price.

While previous estimates projected the high end of tolls on a typical day at around $9 at the busiest times, there is no surefire way to know where tolls will need to be set to keep traffic moving until the tolling actually begins, said Virginia Department of Transportation Megaprojects Director Susan Shaw.

“66 inside the Beltway will be dynamically tolled, and really — we’ve been working through our traffic  models and other analyses — we’re going to just have to wait and see as this road gets underway,” she told a Northern Virginia Transportation Alliance breakfast Tuesday.

Since the tolls rise and fall based on the amount of traffic, with higher tolls meant to encourage some drivers to divert to another route that day and possibly carpool or take the bus or train in the future, VDOT has a team ready to watch for traffic changes in the weeks after tolls begin. State studies projected increased delays on several other roads.

The tolls will only apply eastbound from 5:30 a.m. to 9:30 a.m. and westbound from 3 p.m. to 7 p.m. To ride free, drivers will need at least one other person in the car and an E-ZPass Flex switched to HOV mode. Motorcycles, buses and emergency vehicles are also not charged.

Exemptions to HOV rules on that stretch go away when tolls begin. Hybrid drivers or those headed to Dulles Airport had been permitted to use what is today designated as an HOV-only road for two and a half hours eastbound each morning and westbound each afternoon.

“That’s an important change in terms of the rules of the road that you’ll see, and so to ride for free you’ll need to have your E-ZPass Flex put in HOV mode if you have two or more people in your car,” Shaw said.

Drivers have already seen flashes of light from the toll gantries as part of testing — it’s especially noticeable at night. Some drivers heading to or from work in daylight since testing began will soon be driving in the dark as the days get shorter, so the lights could come as a surprise.

Next year, a related project to widen eastbound I-66 between the Dulles Connector and Fairfax Drive is scheduled to begin. The additional lane, Washington & Old Dominion trail improvements, and connector to the Metro at Route 7 are due to open in 2020.

Separate toll lanes on I-66 outside the Beltway are due to be under construction by the end of the year. Those privately built and operated lanes, scheduled to open in 2022, will require at least three people in the car to ride free at any time, similar to the 95 Express Lanes. Final public hearings on the designs are scheduled in mid-November.

The HOV rules inside the Beltway, which the state is responsible for, will rise to require three people in the car for a free ride when the toll lanes outside the Beltway open. The project was approved in 2015. 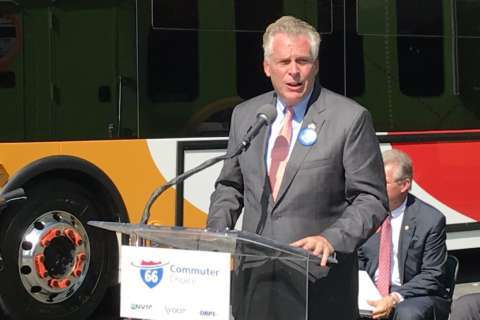