Metro is set to consider selling the naming or branding rights to stations or even entire bus routes or Metro lines as a way to increase revenue from advertising and possibly forestall another round of fare increases next year.
Listen now to WTOP News WTOP.com | Alexa | Google Home | WTOP App | 103.5 FM

WASHINGTON — Metro is set to consider selling the naming or branding rights to stations or even entire bus routes or Metro lines.

The Metro Board’s Customer Service, Operations and Security Committee is expected to vote next week on whether to move forward with selling naming rights, according to documents for a Northern Virginia Transportation Commission meeting held Thursday night.

Assistant General Manager of Customer Service, Communications and Marketing Lynn Bowersox is expected to outline for the Metro Board committee on July 13 what Metro could gain from such a deal as part of a broader effort to increase advertising revenue.

While one Metro source described next week’s presentation as just the beginning of a conversation, some board members believe selling naming rights could be one of the best ways to prevent another round of fare increases next year to address a projected budget gap.

Finance Committee Chair Michael Goldman, who represents Maryland on the board, suggested that for the right price the Silver Line could be rebranded as the Dulles Express for the next decade or the Nationals, Capitals or Wizards could pay to put their branding throughout the stations most heavily used by fans coming to or from their games.

Goldman did not have any estimates yet as to how much money such naming rights deals could raise for Metro, and Metro staff declined to provide additional information before the presentation is made public next week.

In Philadelphia, the stadium stop was renamed from Pattison Avenue to AT&T Station in 2010 in a five-year deal worth about $5 million. A key commuter rail station, Market East, was renamed Jefferson Station after a hospital system paid about $4 million for a five-year deal.

SEPTA agreed to a $7-million deal with Verizon to blanket another downtown commuter rail station with ads but kept the existing name of Suburban Station. Although SEPTA received a large portion of the cash in each deal, the agency that sells ads for the transit system also took a significant cut.

The Los Angeles Metro system backtracked on similar naming rights plans this February, in part due to concerns that free speech protections would mean that the board couldn’t choose which companies and organizations to forge deals with.

Metro has its own policy banning “issue-oriented” ads that covers political, religious and advocacy advertising — aimed at keeping some controversial ads out of the system.

Metro has considered selling station naming rights before, but decided not to move forward. In early 2011, a Metro presentation estimated selling the naming rights for some stations could net the agency $1 million to $2 million per year. 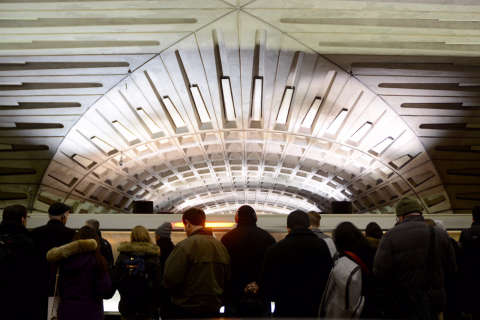 Md. leaders working on their own Metro funding plan