A woman was shot multiple times in front of her Northeast D.C. home by a woman dressed as a UPS delivery driver, according to police.

The shooting suspect, later identified by police as Tommie Lynn Dunmire, 54, of Norfolk, Virginia, shot herself in her car only blocks away as she fled the scene, D.C. police said.

At 9:25 p.m. Friday, police officers were called to investigate reports of gunshots in the 1600 block of Rosedale Street in the Kingman Park neighborhood of Northeast.

When first responders arrived on the scene, they say a woman was found suffering from multiple gunshot wounds. She was immediately transferred to the hospital, where she is being treated for non life-threatening injuries.

Authorities said that the two women knew each other and had a previous altercation before this incident. Police told NBC Washington that they believe the suspect dressed like a UPS employee to trick the woman into opening her door.

Dunmire was apprehended driving away in her car in the 1400 block of Florida Avenue, NE. Police said she shot herself in the head as officers approached the vehicle.

Police said Saturday that Dunmire is in the hospital in critical condition and charges are pending against her.

Officers are also investigating a male passenger who was in the car with the suspect when she was stopped by police. Police have not confirmed if the suspect is a real UPS employee.

NBC Washington contributed to this report. 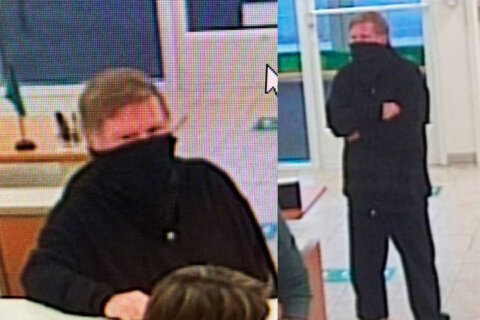