▶ Watch Video: U.S. is averaging 100,000 COVID-19 cases a day as hospitalizations spike across the South

A Jacksonville, Florida, church turned into a COVID-19 vaccination site after six members of the congregation died from the virus within 10 days. Impact Church senior pastor George Davis said at least 15 other members of the church reported having COVID-19 and some were hospitalized.

“When the Delta variant hit Florida, in Jacksonville over the last couple months we saw a significant uptick in people we know, or who were connected to his church in some way, that contracted the virus,” Davis told CBS News.

Davis said none of those who reported a positive test traced it to the church. He said Impact Church still follows social distancing, offers hand sanitizer and asks worshipers to wear masks.

Impact Church had worked with Duval County health officials to open a vaccine site at the church in March, which drew about 800 people, Davis said. The pastor was inspired to hold another one on Sunday, August 8, as Florida struggles with its biggest surge yet of the virus.

“Six people actually passed away over the span of about a 10-day period, and probably after the fourth one, it was so disheartening and just so tiring, because each of them was unvaccinated,” Davis said, adding that four out of the six who died were under the age of 35.

“I made a decision I’m going to hold another event, so that if there are people sitting in our audience that are still unvaccinated, but might be open to it now, I’m going to give them a chance to do it right here at their church,” he said. “That was the impetus for it.” 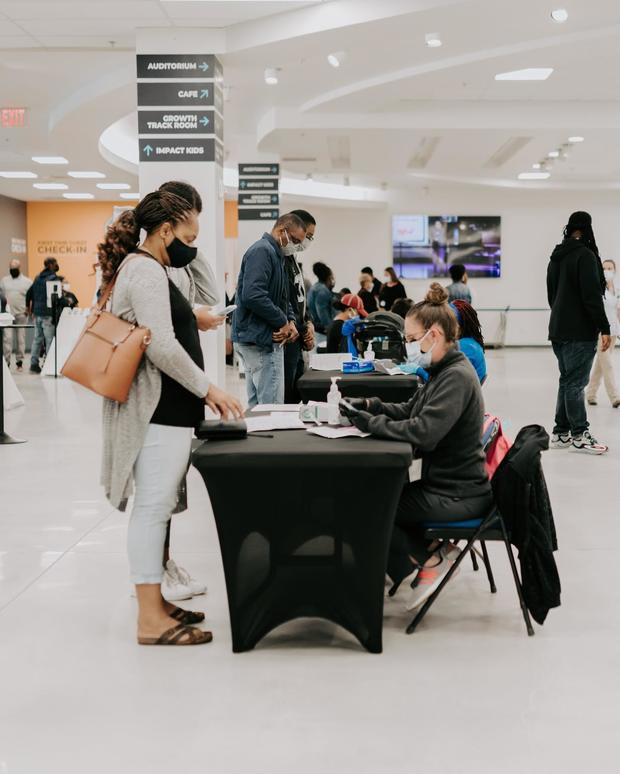 Impact Church senior pastor George Davis said about 269 people were vaccinated on Sunday after six members of the congregation died of COVID-19.

Davis said about 269 people were vaccinated on Sunday and county officials administering the vaccines told him 35% of those were teens. He said the overwhelming majority of those who got vaccinated were members of the church.

“We’re having people we care about we’re having to bury, and I really think this vaccine would’ve helped them not pass away,” he said. “Despite whatever controversy is attached to it or the concern people may have, I felt it was important to give another opportunity, make it as easy as possible [to get vaccinated].”

Davis said he decided to hold it on Sunday, during services, but the event was open to all who were eligible for a vaccine. “Some came to get vaccinated, then attended one of our services,” he said.

“He was a huge proponent of helping people get vaccinated,” Davis said. “He was the first person to get vaccinated in the state of Florida. UF Health was holding vaccination events in his honor … and they sent out a couple of educators from UF Health to help people who had hesitancy and answer their questions.”

The state of Florida has reported a total of 2,725,450 COVID-19 cases, with the number of infections breaking records in recent weeks with the spread of the highly contagious Delta variant. There were over 134,500 new cases during the week of July 30 to August 5 alone, according to the state’s department of health.

As of Friday, more than 12.1 million people in Florida have gotten at least one dose of vaccine — that’s about 63% of the eligible population (people age 12 or above).

But the vaccination rate in Duval County, where Jacksonville is located, has lagged, with just 54% of the county’s eligible population vaccinated. Last week, Duval County recorded 16,233 vaccinations. Over the same week, 8,143 people in the county tested positive for the virus.

Davis said he and his family are vaccinated, and he often encourages Impact Church worshipers to get the vaccine.

“I would love to see our government leader and community leaders all come together to just help get my people vaccinated instead of fighting about it and end up with nothing being done,” he said.