More than a million passengers have traveled through US airports daily for at least 10 days in a row, according to data from the Transportation Security Administration -- at a time experts say cases of a dangerous variant are climbing across the country.
Listen now to WTOP News WTOP.com | Alexa | Google Home | WTOP App | 103.5 FM

More than a million passengers have traveled through US airports daily for at least 10 days in a row, according to data from the Transportation Security Administration — at a time experts say cases of a dangerous variant are climbing across the country.

On Friday alone, the country saw more than 1.4 million passengers in airports nationwide — which is a pandemic-era record.

“What we’re doing is essentially spreading the B.1.1.7 variant across the nation,” Dr. Peter Hotez, dean of the National School of Tropical Medicine at Baylor College of Medicine, told CNN on Sunday.

The spread of variants, in combination with the still small percentage of fully vaccinated Americans, is why experts have stressed state leaders should not be lifting Covid-19 measures just yet — and Americans should be doubling down on safety measures, to avoid another surge of the virus.

But while at least a dozen governors have eased restrictions this month and cases across the US are no longer seeing the steep declines recorded earlier this year, one expert says it’s unlikely the US will see another Covid-19 surge.

That’s because the number of prior infections and now vaccinations in the US have begun to form “enough of a backstop” to prevent another spike, Dr. Scott Gottlieb, the former Food and Drug Administration commissioner, told CBS’s “Face the Nation” on Sunday.

“I think what you could see is a plateauing for a period of time before we continue on a downward decline — in large part because B.1.1.7 is becoming more prevalent, in large part because we’re pulling back too quickly, with respect to taking off our masks and lifting the mitigation,” he said.

Other experts have said that plateauing of cases the US is reporting could serve as a predictor for another surge. Emergency physician Dr. Leana Wen told CNN last week she believes the US could be on the cusp of another surge.

Others say it’s hard to predict what will happen.

“It’s very hard to say,” Hotez told CNN. “We’re in a race, that’s what it comes down to. We’ve gotten a single dose (of Covid-19 vaccine) into about a quarter of the US population … and it could go either way right now.”

“This is why it’s really important for the governors to stay the course and to implement masks and social distancing,” he added.

Some travelers have landed in popular spring break destinations like Florida, where local officials say the vacationers have been more than they can handle.

On Saturday, Miami Beach Mayor Dan Gelber declared a state of emergency and set a curfew, telling CNN too many people were coming “without the intention of following the rules, and the result has been a level of chaos and disorder that is just something more than we can endure.”

Florida has so far reported the highest number of cases of the B.1.1.7 variant — which experts say is highly contagious and potentially more deadly — in the country, according to data from the Centers for Disease Control and Prevention.

“I wish that folks would at least mask up,” emergency physician Dr. Megan Ranney told CNN Sunday, referring to the spring break crowds. “I expect that very few of those young adults have been vaccinated and watching them gather together in those crowds, even outside, gives me fear that they’re going to bring that B.1.1.7 variant back to their home state and spread it.”

Other experts have voiced the same concern, warning all the returning vacationers could help fuel Covid-19 surges in other parts of the country, especially now that vaccination numbers are still so low.

“We are very worried about transmissible variants. A lot of them have come through our travel corridors, so we’re being extra cautious right now with travel,” Walensky had told CNN.

So far, more than 81.4 million Americans have gotten at least one dose of a Covid-19 vaccine, according to CDC data. That’s roughly 24.5% of the US population.

More than 44 million — about 13.3% of the population — have been fully vaccinated, the data shows.

While the number continues to climb and leaders across the country employ more methods to get shots into arms faster — like opening more mass vaccination sites and expanding eligibility requirements — challenges still lie in the way of getting the country to herd immunity.

Those challenges include vaccine hesitancy and political divisions. A recent CNN poll conducted by SSRS shows that while 92% of Democrats say they have gotten a dose of the vaccine or plan to get one, that falls to 50% among Republicans.

When asked why he believed there is skepticism among Republicans, Arkansas Gov. Asa Hutchinson told CNN he thought it is a “natural resistance to government and skepticism of it.”

“The hesitancy is worrisome not just here, but all across the country, and I expect as a country we’ll get to 50% vaccination rate of the population. But we’re going to have a harder time getting from 50% to 70%. And it’s about overcoming the skepticism, it is about education … but it’s also confidence,” he said.

As more Americans see others get the vaccine, the governor said he expects the acceptance rate of vaccines to go up.

In Missouri, Gov. Mike Parson said late last week that while he encourages everyone to get vaccinated, “there’s still going to be a certain amount of people that’s not going to take the vaccine and they have every right to do that.”

“We got to do a better job of making sure everybody understands the importance of the vaccine, and yet maintain the respect of people that don’t want to take a vaccine, and it is going to be a challenge to see how many people we can get done, but we’re going to do everything we can.”

Meanwhile, AstraZeneca is expected to apply in the next few weeks for emergency use authorization for its Covid-19 vaccine in the US.

The findings from the new Phase 3 trial, which included more than 32,000 participants, could boost confidence in the vaccine, which was originally developed by the University of Oxford.

Many European countries paused their rollout over a small number of blood clot concerns — going against the advice of international medical agencies as the continent confronts a third wave of infections fueled by variants of the virus.

The trial showed that the vaccine was well-tolerated and identified no safety concerns, the company said. An independent committee “found no increased risk of thrombosis or events characterised by thrombosis among the 21,583 participants receiving at least one dose of the vaccine,” according to AstraZeneca.

The new data came from a Phase 3 clinical trial conducted in the US, Chile and Peru. AstraZeneca says it plans to submit the findings to a scientific journal for peer review. 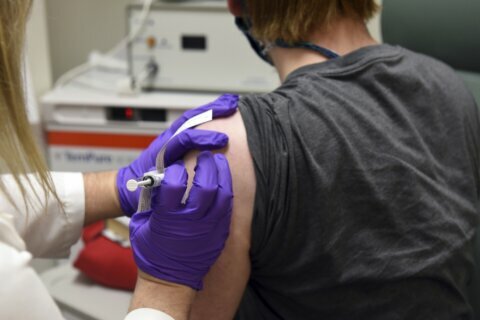