While outlining his plan to halt the spread of the coronavirus last week, President Joe Biden tempered his ever-present optimism with a dose of realism about the potent staying power of this deadly pandemic and the fact that the nation's vaccine distribution system is a long way from becoming an efficient machine.
Listen now to WTOP News WTOP.com | Alexa | Google Home | WTOP App | 103.5 FM

While outlining his plan to halt the spread of the coronavirus last week, President Joe Biden tempered his ever-present optimism with a dose of realism about the potent staying power of this deadly pandemic and the fact that the nation’s vaccine distribution system is a long way from becoming an efficient machine.

“Things are going to continue to get worse before they get better,” the new President said, noting that the US is likely to cross a half-million deaths next month as cases continue to mount. “We didn’t get into this mess overnight, and it’s going to take months for us to turn things around.”

For many Americans who feel trapped in a never-ending season of grief, isolation and disappointment, the start of a new year, a new administration and a new Congress seemed to offer hope — however naïve it was — that there would be some flip of a switch that could speed up the nation’s lurching process for getting shots into arms.

But even as Biden announced a series of executive actions last week intended to curb the pandemic, the reality is sinking in that Americans may be stuck in this maddening purgatory for quite a while longer — with their state governments finally in possession of vaccines that can protect them, but most people still finding them out of reach.

In the flurry of White House activity last week, scientists and epidemiologists hailed the actions Biden took with the stroke of his pen — which included harnessing the Defense Production Act to produce more vaccine supplies like needles, syringes and PPE; aid to states in setting up community vaccination clinics; a strong push to ensure vaccine equity in Black and Brown communities; and the promise that they will find a way to get more doses out to community pharmacies.

But at a time when thousands of Americans are still dying each day, it is still not clear how much of an impact the Biden administration can make on the biggest problem facing the nation right now — that there simply aren’t enough vaccine doses available for people who desperately want to return to some sense of normalcy.

On Saturday, the US finally hit that elusive target that the Trump administration had set for the end of last year: 20 million doses of Covid-19 vaccines administered, according to new data published by the US Centers for Disease Control and Prevention. But the CDC also said that just shy of half (49.6%) of the doses delivered to states have been administered.

Asked to explain that puzzling gap between expectations and reality, Dr. Anthony Fauci said last week that there is no clear answer.

“What I think we really need to do is we’ve got to go into the trenches,” Fauci told CNN’s John Berman on “New Day,” noting that federal officials are hearing from people in some localities where doses aren’t being given out and other states that are in desperate need of more doses. “You’ve got to get into the local area and find out ‘What’s going on here?’ ‘What’s wrong?’ Let’s try and fix it.’ ”

In the midst of that frustration over the pace of vaccinations, Biden is continuing to face heat over whether his goal of administering 100 million doses in a 100 days is too low a bar, given that the US is already averaging almost a million doses a day.

On Saturday night, Biden senior adviser Cedric Richmond told CNN’s Pamela Brown that the administration is still committed to that goal as they try to sort out the hurdles that were created by the Trump administration’s decentralized approach — most notably the lack of a plan to get the doses distributed to that “last mile” in every state.

National Institutes of Health Director Dr. Francis Collins, who said Saturday on MSNBC that the vaccine rollout in the US is “not as bad as some people are painting it,” said it was wise for Biden’s team to avoid setting expectations too high with their 100-day goal.

“We might easily exceed that, but I think he’s being smart,” Collins said of the 100 million doses. “Instead of overpromising and underdelivering, which is sort of what happened back in December, he’s going to kind of under promise and then hope to overdeliver.”

But that is cold comfort to Americans still terrified of losing their loved ones before vaccines becomes available to them.

On a call with reporters this week, White House Covid coordinator Jeff Zients said the administration could not yet estimate when the vaccine will be “widely available” to the general population, in part because what they inherited from the Trump administration is “so much worse than we could have imagined.”

Pfizer/BioNTech has promised to supply 200 million doses to the US government by July, and Moderna has said it will supply the same amount by the end of June. (Both vaccines require two doses).

If Johnson & Johnson were to get emergency use authorization from the FDA, Fauci said Saturday on MSNBC that the number of vaccine doses available to Americans could dramatically increase by May.

“Once they get going into May, June, July, August, then you’re going to see a sharp escalation of additional doses of this one-dose vaccine,” Fauci said, adding that change would make it more likely that 70 to 85% of Americans could be vaccinated by the end of the summer.

But those dates on the calendar seem very far away, and states are still struggling from week to week to understand how many doses they will get — creating a major kink in the distribution process — even though the Biden team says they are redoubling efforts to fix that problem and create more transparency in the process.

Some two-thirds of Americans now say that they intend to get vaccinated, according to a new CNN Poll conducted by SSRS, which is an increase from the 51% who said the same in October.

But a new Kaiser Family Foundation poll also reflected the level of confusion about how to get the vaccine among some of the highest priority groups. About six in ten adults who are 65 and older say they do not have enough information about when and where they will be able to get the vaccine. More Black and Hispanic adults — groups that have been disproportionately affected by the virus — were likely to say they don’t have enough information about where to get the vaccine (six in ten) compared with about half of White adults who said the same. Overall, two-thirds of adults said the federal government was doing a “fair” or “poor” job distributing the vaccine to states. The survey was conducted January 11-18, before Biden took office.

Since the Trump administration announced that it was expanding eligibility criteria for the vaccine to include those 65 and older, the race to book appointments for eligible loved ones and neighbors has felt like a form of the Hunger Games for those who are lucky enough to have laptops and WiFi and time to engage in that process.

Many Americans have spent hours online scrolling for a coveted appointment slot, rushed to fill out the patient’s information, and then, in many cases, felt the surge of disappointment when hitting submit only to find out that the slot was already gone.

As vaccine supply has dwindled in big cities like New York and Los Angeles, vaccination appointments are getting canceled because there are not enough doses. Meanwhile unofficial, non-appointment standby lines — for surplus vaccine doses that might be given away to those who aren’t yet eligible — are springing up outside clinics that actually have it.

In California, which hit a single-day record for deaths last week, state epidemiologist Erica Pan said during a vaccine advisory panel meeting last week that at the current pace that the state is receiving doses, it could be June before the state is able to vaccinate just the residents in the current eligibility category who are 65 and older.

Los Angeles Mayor Eric Garcetti acknowledged that some people waited as long as five hours for their vaccine shots at the mass vaccination clinic at Dodger Stadium this week. Los Angeles County officials tried to tamp down expectations about the number of people who get vaccinated by noting that they have more than enough providers ready to administer the vaccine, but only enough vaccination supply to inoculate 1 in 4 people who are currently eligible.

New Jersey Gov. Phil Murphy was one of many governors voicing frustration with the limited supply of vaccine doses this week, telling CNN’s Wolf Blitzer that widespread vaccinations will take much longer than anyone predicted.

“I think the Biden team has found that the cupboard is a lot barer than anyone thought,” Murphy, a Democrat, told Blitzer on “The Situation Room.”

“I’m not as worried about running out as I am about not getting enough… We’ve got a huge supply-demand imbalance.” 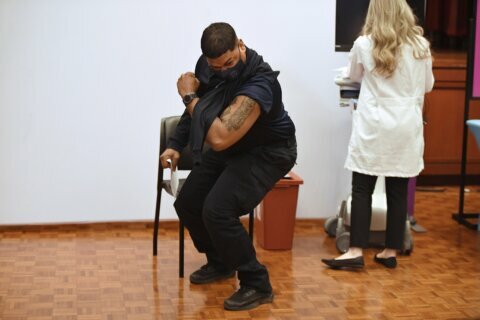