Food banks embark on expansions with lessons from COVID

Food banks across the country are pursuing major expansion projects driven in part by their experiences during the pandemic, when they faced an explosion of need.
Listen now to WTOP News WTOP.com | Alexa | Google Home | WTOP App | 103.5 FM
(1/5) 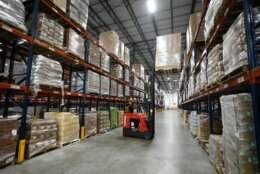 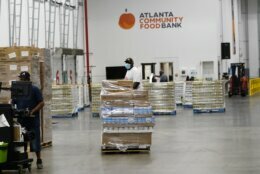 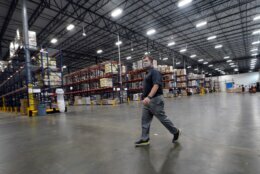 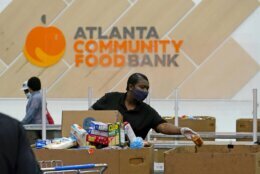 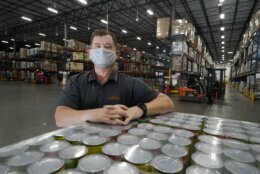 ATLANTA (AP) — Food banks across the country are pursuing major expansion projects driven in part by their experiences during the pandemic, when they faced an explosion of need.

“So many people who had never had to ask for help found themselves in a position of needing it and not knowing where to go,” said Ginette Bott, president and CEO of the Utah Food Bank. “It was like somebody flipped a switch.”

Even though demand for fresh and packaged provisions has dropped from pandemic peaks, the need remains far above pre-pandemic levels.

Feeding South Florida is planning a large new plant to increase its produce supply. Two North Carolina food banks flush with cash from billionaire philanthropist MacKenzie Scott are set to build new structures that will double their capacity to store food. The Utah Food Bank is adding space in Salt Lake City and is also set to erect new food warehouses elsewhere in the state.

And in Georgia, the Atlanta Community Food Bank moved into a 345,000-square-foot (32,000-square-meter) warehouse billed as the world’s largest food bank. The move preceded COVID-19, but officials say it was a boon during the pandemic.

“We have never, ever, including during the pandemic, been able to touch everyone who needs (help),” said Claire Babineaux-Fontenot, CEO of Feeding America, a national network of most food banks in the U.S. “But what we’ve come to understand better than we ever have before is what we’re capable of and how do we think through the long game.”

In Utah, one of two new warehouses will be near a Native American reservation that was a challenge to serve during the pandemic, said Bott. The second site will offer free dinners to kids, a population that suffered acutely from food insecurity when schools that provided meals went virtual.

Overall, the food bank will more than double its storage capacity after it incurred additional costs for extra space needed during the pandemic, Bott said. She estimated the new projects would cost roughly $40 million.

As part of its own expansion, the Food Bank of the Albemarle in northeast North Carolina is making sure it has enough generators in case a hurricane or tornado knocks out power, said Executive Director Liz Reasoner.

Meanwhile, Feeding South Florida is planning to build a 50,000- to 80,000-square-foot (4,600 to 7,400-square-meter) plant to freeze and package produce. The goal is to take in more crops during the growing season and then make them available year-round, said CEO Paco Velez.

“There’s still a lot of produce that goes to waste,” he said.

The projects come amid persistent food insecurity in the U.S. despite the country’s slow crawl back from the economic fallout of the pandemic. Feeding America’s food banks provided a record 6.6 billion meals between July 2020 and June 2021, up from 5.2 billion the year before, the organization said.

On a recent weekday, a dozen cars lined up well before opening time at the Toco Hills Community Alliance, a food pantry in a well-off suburb northeast of Atlanta. Volunteers in masks waited under a white tent to load canned fruit and vegetables, fresh produce and meat and other groceries into trunks as drivers came through one at a time.

Helen Moody, a 60-year-old disabled U.S. Army veteran, has relied on the pantry for groceries since 2017. Moody said she and her husband live off $2,000 a month and do not qualify for federal food assistance.

“We’re on a real tight budget,” she said. “When we come over here, then we’re able to have just a little bit for other things, just a little leeway because other than that you have no breathing space.”

The community alliance buys some of its food from the Atlanta Community Food Bank at deeply discounted prices. The food bank’s expansion has given it access to a wider variety of food products, said Lisa Heilig, the alliance’s executive director. A few months ago, she was able to offer guava, a fruit familiar to some of the Hispanic immigrants who use the pantry.

The Atlanta Community Food Bank’s new facility near Atlanta’s international airport has a food storage area equal to roughly five and a half football fields. A tour of the facility last month provided a glimpse of the advantages a larger site provides.

Forklifts carrying large pallets of food moved freely around the expansive floor, their drivers beeping gently to warn passersby. Nearly three dozen docking doors allowed trucks to deliver and pick up food with no wait times. In a separate area, volunteers in masks checked the expiration dates of cereal boxes, canned soup and other groceries.

Food banks rely heavily on volunteers, but many could not safely accommodate them during the pandemic and had to find alternate sources of help.

The new location has allowed the food bank to distribute tens of millions of additional pounds of food.

“There’s just a large number of our neighbors, who by virtue of rising housing costs, rising health care costs and other pressures that they face, need help meeting all their basic needs,” said Kyle Waide, president of the Atlanta Community Food Bank. “And we think that pressure is going to be here indefinitely even without the pandemic.”