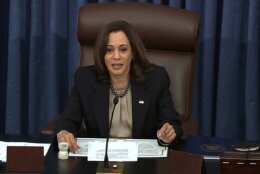 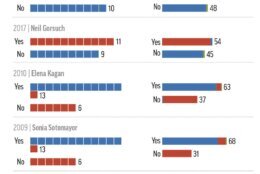 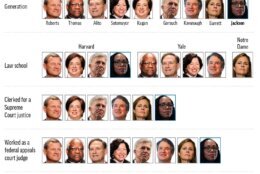 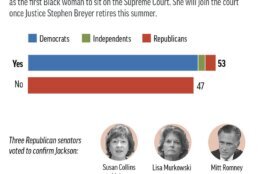 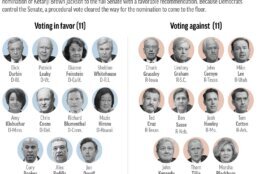 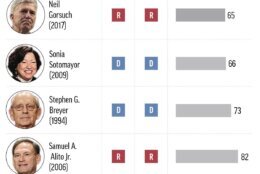 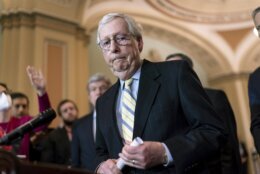 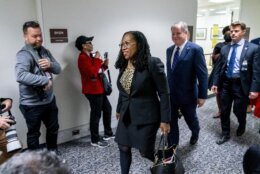 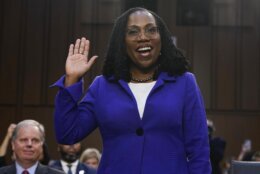 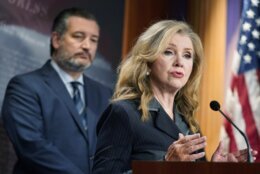 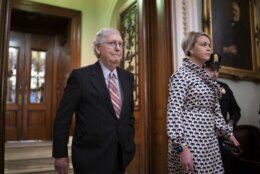 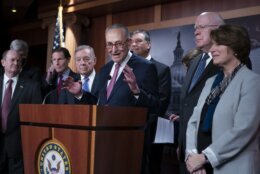 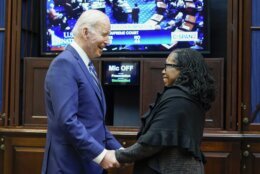 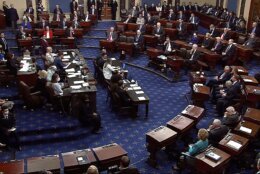 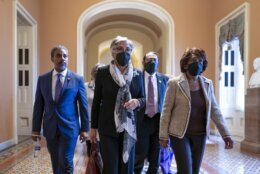 WASHINGTON (AP) — The Senate confirmed Ketanji Brown Jackson to the Supreme Court on Thursday, shattering a historic barrier by securing her place as the first Black female justice and giving President Joe Biden a bipartisan endorsement for his promised effort to diversify the high court.

Cheers rang out in the Senate chamber as Jackson, a 51 year-old appeals court judge with nine years experience on the federal bench, was confirmed 53-47, mostly along party lines but with three Republican votes. Presiding over the vote was Vice President Kamala Harris, also the first Black woman to reach her high office.

Biden tweeted afterward that “we’ve taken another step toward making our highest court reflect the diversity of America.” Senate Majority Leader Chuck Schumer exulted that it was “a wonderful day, a joyous day, an inspiring day — for the Senate, for the Supreme Court and for the United States of America.”

Harris said as she left the Capitol that she was “overjoyed, deeply moved.”

Jackson will take her seat when Justice Stephen Breyer retires this summer, solidifying the liberal wing of the 6-3 conservative-dominated court. She joined Biden at the White House to watch the vote, embracing as it came in. The two were expected to speak, along with Harris, at the White House Friday.

During four days of Senate hearings last month, Jackson spoke of her parents’ struggles through racial segregation and said her “path was clearer” than theirs as a Black American after the enactment of civil rights laws. She attended Harvard University, served as a public defender, worked at a private law firm and was appointed as a member of the U.S. Sentencing Commission.

She told senators she would apply the law “without fear or favor,” and pushed back on Republican attempts to portray her as too lenient on criminals she had sentenced.

Jackson will be just the third Black justice, after Thurgood Marshall and Clarence Thomas, and the sixth woman. She will join three other women, Sonia Sotomayor, Elena Kagan and Amy Coney Barrett – meaning that four of the nine justices will be women for the first time in history.

Her eventual elevation to the court will be a respite for Democrats who fought three bruising battles over former President Donald Trump’s nominees and watched Republicans cement a conservative majority in the final days of Trump’s term with Barrett’s confirmation. While Jackson won’t change the balance, she will secure a legacy on the court for Biden and fulfill his 2020 campaign pledge to nominate the first Black female justice.

“This is a tremendously historic day in the White House and in the country,” said White House press secretary Jen Psaki after the vote. “And this is a fulfillment of a promise the president made to the country.”

The atmosphere was joyful, though the Senate was divided, as Thursday’s votes were cast. Senators of both parties sat at their desks and stood to vote, a tradition reserved for the most important matters. The upper galleries were almost full for the first time since the beginning of the pandemic two years ago, and about a dozen House members, part of the the Congressional Black caucus, stood at the back of the chamber.

Harris called out the tally, pausing with emotion, and Democrats erupted in loud applause and cheers, Schumer pumping his fists. A handful of Republicans stayed and clapped, but most by then had left.

Despite Republican criticism of her record, Jackson eventually won three GOP votes. The final tally was far from the overwhelming bipartisan confirmations for Breyer and other justices in decades past, but it was still a significant accomplishment for Biden in the 50-50 split Senate after GOP senators aggressively worked to paint Jackson as too liberal and soft on crime.

Statements from Republican Sens. Susan Collins of Maine, Lisa Murkowski of Alaska and Mitt Romney of Utah all said the same thing — they might not always agree with Jackson, but they found her to be enormously well qualified for the job. Collins and Murkowski both decried increasingly partisan confirmation fights, which only worsened during the battles over Trump’s three picks. Collins said the process was “broken” and Murkowski called it “corrosive” and “more detached from reality by the year.”

Biden, a veteran of a more bipartisan Senate, said from the day of Breyer’s retirement announcement in January that he wanted support from both parties for his history-making nominee, and he invited Republicans to the White House as he made his decision. It was an attempted reset from Trump’s presidency, when Democrats vociferously opposed the three nominees, and from the end of President Barack Obama’s, when Republicans blocked nominee Merrick Garland from getting a vote.

Once sworn in, Jackson will be the second youngest member of the court after Barrett, 50. She will join a court on which no one is yet 75, the first time that has happened in nearly 30 years.

Jackson’s first term will be marked by cases involving race, both in college admissions and voting rights. She has pledged to sit out the court’s consideration of Harvard’s admissions program since she is a member of its board of overseers. But the court could split off a second case involving a challenge to the University of North Carolina’s admissions process, which might allow her to weigh in on the issue.

Judith Browne Dianis, executive director the Advancement Project, a civil rights organization, said Jackson will make the court more reflective of communities that are most impacted by the judiciary.

“The highest court in the land now will have a firsthand perspective of how the law impacts communities of color — via voting rights, police misconduct, abortion access, housing discrimination or the criminal legal system, among other issues,” she said. “This will ultimately benefit all Americans.”

Jackson could wait as long as three months to be sworn in, as the court’s session generally ends in late June or early July. She remains a judge on the federal appeals court in Washington, but she stepped away from cases there when she was nominated in February.

Republicans spent the confirmation hearings strongly questioning her sentencing record, including the sentences she handed down in child pornography cases, which they argued were too light. Jackson declared that “nothing could be further from the truth” and explained her reasoning in detail. Democrats said she was in line with other judges in her decisions.

The GOP questioning in the Judiciary Committee showed the views of many Republicans, though, including Senate Majority Leader Mitch McConnell, who said in a floor speech Wednesday that Jackson “never got tough once in this area.”

“You could try and create a straw man here, but it does not hold,” said New Jersey Sen. Cory Booker at the committee’s vote earlier this week. The panel deadlocked on the nomination 11-11, but the Senate voted to discharge it from committee and moved ahead with her confirmation.

In an impassioned moment during the hearings last month, Booker, who is Black, told Jackson that he felt emotional watching her testify. He said he saw “my ancestors and yours” in her image.

“Don’t worry, my sister,” Booker said. “Don’t worry. God has got you. And how do I know that? Because you’re here, and I know what it’s taken for you to sit in that seat.” 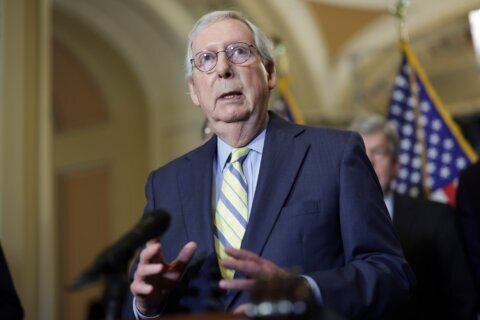 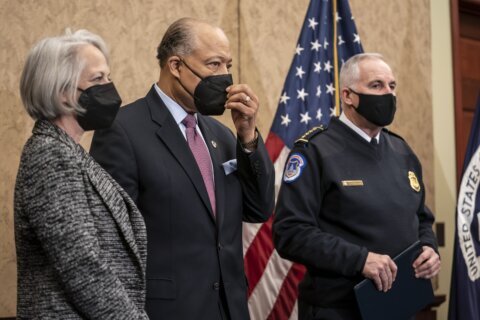