Pope visits Nunavut for final apology of his Canadian tour

Pope Francis traveled to the edge of the Arctic on Friday to deliver an apology to the Inuit people for the “evil” of Canada’s residential schools, wrapping up his week-long “penitential pilgrimage” to Canada with a dramatic visit to the remote territory of Nunavut to meet with school survivors.
Listen now to WTOP News WTOP.com | Alexa | Google Home | WTOP App | 103.5 FM
(1/23) 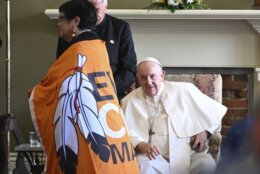 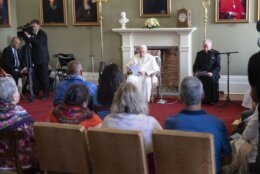 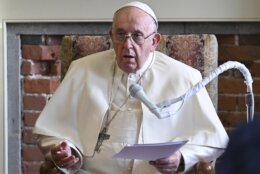 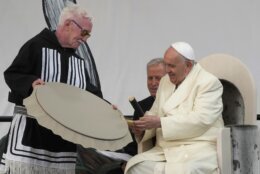 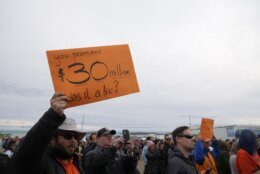 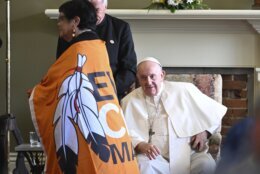 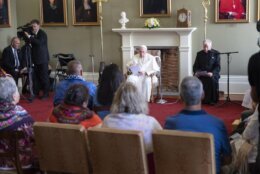 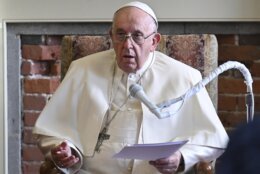 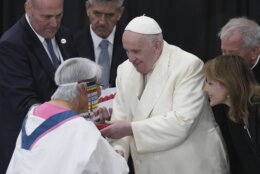 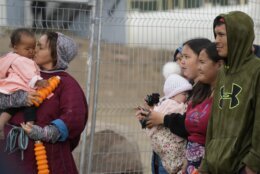 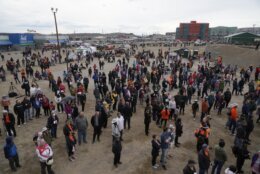 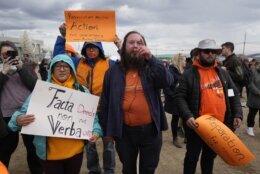 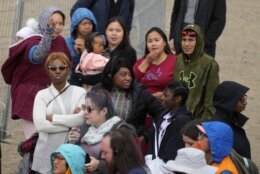 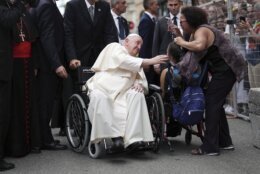 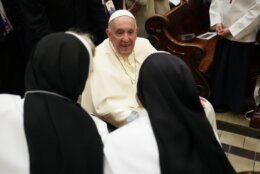 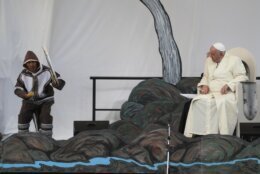 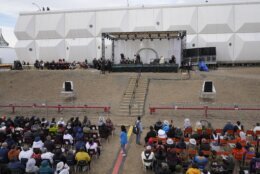 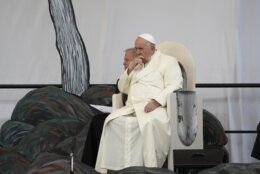 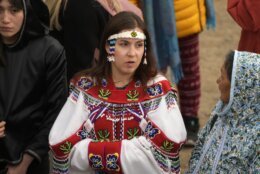 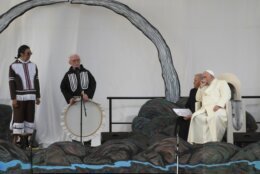 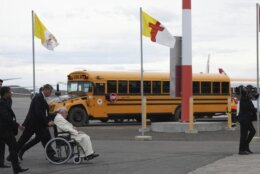 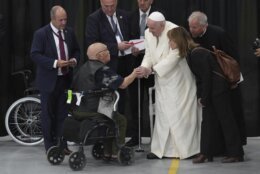 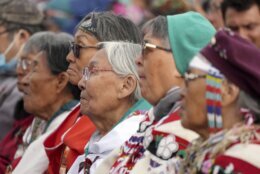 IQALUIT, Nunavut (AP) — Pope Francis traveled to the edge of the Arctic on Friday to deliver an apology to the Inuit people for the “evil” of Canada’s residential schools, wrapping up his week-long “penitential pilgrimage” to Canada with a dramatic visit to the remote territory of Nunavut to meet with school survivors.

Francis landed in Iqaluit, population 7,500, and met with former students at a primary school to hear first-hand their experiences of being torn from their families and forced to attend church-run, government funded boarding schools. The aim of the policy, which was in effect from the late 1800s to the 1970s, was to sever children from their Native cultures and assimilate them into Canadian, Christian society.

“How evil it is to break the bonds uniting parents and children, to damage our closest relationships, to harm and scandalize the little ones!” Francis told a gathering of Inuit youths and elders outside the school.

He thanked the school survivors for their courage in sharing their suffering, which he had heard for the first time this past spring when delegations of First Nations, Metis and Inuit peoples traveled to the Vatican to seek an apology.

“This only renewed in me the indignation and shame that I have felt for months,” Francis said. “I want to tell you how very sorry I am and to ask for forgiveness for the evil perpetrated by not a few Catholics who contributed to the policies of cultural assimilation and enfranchisement in those schools.”

Before his speech, the pope — seated in a chair covered in seal skin — watched Inuit throat singers and dancers perform. During his address, he said “I’m sorry” in Inuktitut, the Inuit language, drawing cheers. And he ended by saying “thank you” in Inuktitut.

The events stretched far longer than planned; the pope’s plane took off for Rome about 90 minutes behind schedule.

The visit capped an unusual tour designed specifically to give the pope opportunities to apologize to generations of Native peoples for the abuses and injustices they suffered and to assure them that he was committed to helping them reconcile their relationship with the Catholic Church. After stops in Edmonton, Alberta, and Quebec City, Francis ended his pilgrimage in Nunavut, a vast territory straddling the Arctic Circle that represents the farthest north the Argentine pope has ever traveled.

Ahead of his arrival, organizers readied scores of hats with mesh face protection to guard against the mosquitoes that sometimes abound in the mild summer temperatures of Iqaluit, which is some 200 miles south of the Arctic Circle.

The Canadian government has said physical and sexual abuse were rampant at the residential schools, and Francis on Thursday begged forgiveness for the “evil” of clergy sexual abuse, vowing an “irreversible commitment” to prevent it from happening again. His vow came after he omitted a reference to sexual abuse in his initial apology this week, upsetting some survivors and earning a complaint from the Canadian government.

Francis’ apologies have received a mixed response, with some school survivors welcoming them as helpful to their healing and others saying far more needs to be done to correct past wrongs and pursue justice. Several protesters appeared at the main event in Iqaluit with placards making demands of this nature.

The Inuit community is seeking Vatican assistance to extradite an Oblate priest, the Rev. Joannes Rivoire, who ministered to Inuit communities until he left in the 1990s and returned to France. Canadian authorities issued an arrest warrant for him in 1998 on accusations of several counts of sexual abuse, but it has never been served.

The Canadian government said this week that it had asked France to extradite Rivoire, but did not say when. Rivoire has denied wrongdoing.

Francis heard from survivors in a private meeting, including one woman whose daughter died at a residential school; the woman and her husband have been searching for her grave for years. Another speaker was the daughter of one of Rivoire’s victims, who died after years of alcohol abuse, said Lieve Halsberghe, an advocate for clergy abuse victims who has fought for years to bring Rivoire to justice.

The Inuit warmly welcomed Francis to their homeland and lit a ceremonial lamp, or qulliq, for the occasion.

Francis referred to its symbolic significance in his remarks, saying it dispelled the darkness and brought warmth.

“We are here with the desire to pursue together a journey of healing and reconciliation that, with the help of the Creator, can help us shed light on what happened and move beyond that dark past,” Francis said

Directing himself to younger generations, Francis urged them, too, to choose light rather than dark, to keep hopes alive, aim high and protect the environment. He stressed the value of teamwork, recalling the successes of Canada’s beloved national sport of ice hockey.

Jimmy Lucassi, an Inuit from Iqaluit, was at the school grounds for Francis’ visit along with his wife and children. “It probably means a lot to a lot of people,” he said. “It’s all we’ve been talking about. They closed the stores to celebrate.”

The trip was the first in which the 85-year-old pope was forced to use a wheelchair, walker and cane because of painful strained knee ligaments that forced him to cancel a trip to Africa earlier this month. Even with a reduced schedule, the trip was clearly uncomfortable for Francis and he has said he felt “limited” by his inability to freely move about as he pleases.

Future travel is not clear. Francis has said he wants to visit Kyiv, Ukraine, but no trip is immediately on the horizon. He is also expected in Kazakhstan in mid September for an inter-religious meeting that might provide an opportunity to meet with the Russian Patriarch Kirill, who has justified Russia’s invasion of Ukraine.

Reaction to Francis’ visit to Canada has been mixed, with even the government saying his apology didn’t go far enough in accepting blame for the institutional role the Catholic Church played in supporting the school policy.

Some school survivors have accepted his apology as genuine and helpful to their process of healing from trauma. Others have found it still wanting, angered that it took the discovery of presumed unmarked graves outside some residential schools for the pope to apologize after Canada’s Truth and Reconciliation Commission in 2015 specifically called for a papal apology to be delivered on Canadian soil.

Still others have demanded the church provide further information about the fate of children who never returned home from the schools and repudiating the 15th century papal bulls that informed the so-called “Doctrine of Discovery” which legitimized the colonial-era seizure of Native lands for the sake of spreading Christianity.

It is unlikely that the Vatican itself would hold records concerning the fate of Indigenous children who died at the schools, though it would have documentation on any priests who faced canonical penalties after 2001, and possibly some before then. If the documents about the children exist, they would likely be in the archives of individual religious orders.

Canada to use regulation to ban handgun imports in 2 weeks