MONTREAL (AP) — Canadian Prime Minister Justin Trudeau defended his decision to call an election during the pandemic in first debate of the campaign for this month’s election.

Trudeau is facing a tough re-election battle against his Conservative Party rival, Erin O’Toole. The vote is Sept. 20.

“Why did you trigger an election in the middle of a fourth wave?” O’Toole asked Trudeau at the French-language debate in Montreal.

Trudeau said he needs a mandate from voters.

“Almost 80 percent of Canadians have done the right thing, they got vaccinated, twice in fact,” said Trudeau, noting Canada is having a fourth wave because 20 percent are unvaccinated.

“And because of them we have to stop democracy from working? No,” Trudeau said.

He criticized O’Toole for not requiring his candidates to be vaccinated.

O’Toole said he believes the country can find reasonable accommodations for those who are unvaccinated, like rapid testing and social distancing.

Four provinces including Quebec and Ontario, Canada’s largest, are bringing in vaccine passports that require citizens to be vaccinated to enter places like restaurants and gyms.

Trudeau called the election last month seeking to win the majority of seats in Parliament but polls show that is unlikely and that he might even lose power to O’Toole and the Conservative party.

Trudeau had wanted to capitalize on the fact that Canada is now one of the most fully vaccinated countries in the world, but the country is now in a fourth wave driven by the delta variant.

“His combative performance might help stop the bleeding for the Liberals or, at least, reassure his base that he still has fire in his belly,” Beland said.

The 49-year-old Trudeau, the son of the late Liberal Prime Minister Pierre Trudeau, became the second youngest prime minister in Canadian history when he was first elected with a majority of seats in Parliament in 2015. He reasserted liberalism in 2015 after almost 10 years of Conservative Party government in Canada, but scandals combined with high expectations damaged his brand.

His father served as prime minister from 1968 to 1984 with a short interruption and remains one of the few Canadian politicians known in other countries. 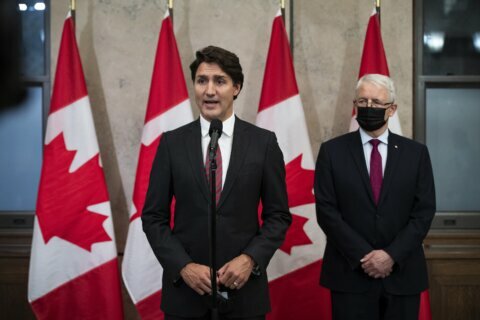 Trudeau: Canada’s decision on whether to allow Huawei coming

39 workers trapped in Canadian mine but evacuation underway