Editor’s note: This story has been updated after an earlier version incorrectly attributed quotes to Mike Rubalsky. This story was also updated to correct the spellings of Kathryn Bauer and Kelly McConkey.

WASHINGTON — Dozens of concerned parents in Calvert County, Maryland, protested Monday outside the Board of Education building in Prince Frederick to demand immediate improvements to school safety.

“Our elementary schools and our middle schools are sitting ducks. Our staff are sitting ducks,” said Kelly McConkey, a member of the Calvert County Board of Education. “I’m trying to get doors put on the classrooms and I’m getting resistance. I’m being told that it affects the heating and air conditioning system.”

The call for parents to take action comes a week after the county’s Board of Education was presented with a motion to arm school safety advocates. It also called for the board to match the $2 million in funds given by the Calvert County Commissioners, but the motion was not carried.

“I did not know until this morning that we do not have something as basic as doors or locks on school doors,” said Calvert County resident Kathryn Bauer. “As a citizen, I am absolutely appalled.”

“Lightbulbs that drop are scaring them. They are going to the ground because they are in fear that it’s someone shooting,” Jafari said.

School board officials say that it’s considering options, but that changes could take some time.

Parent Mike Rubalsky, who was one of the organizers of Monday’s event, understands the board is going through an analysis to have a vulnerability assessment, but he believes there are inexpensive fixes that could happen straight away.

“There are simple changes that could be made with the appropriate pressure being applied. Locks on doors … bag checks — common-sense, low-cost or no-cost ways to help facilitate a sense of safety and security for our schools,” Rubalsky said.

He would like to see armed personnel at every school and suggests schools could create a subcontractor position, paid through the sheriff’s office, but Rubalsky “vehemently believes” arming teachers isn’t the answer. More should also be done to ensure parents are responsible gun owners and that they take responsibility to lock up their weapons, he said.

A hand-wanding system in place at every school is another idea Rubalsky and other concerned parents proposed, rather than metal detectors that could be costly and time-consuming to install.

“I hope people will come out to voice their concerns and demand immediate change — not six months from now, not a year from now,” Rubalsky said.

Gavin Hill, a senior at Northern High School, said he’s not sure school safety advocates should be armed, but thinks something must change. “We are striving for one common goal and that is to make schools a safer place,” Hill said.

Below is a map showing the location of Monday’s protest. 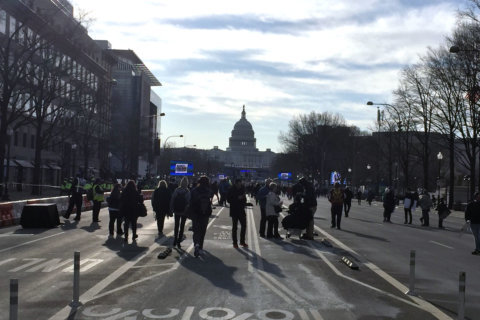