Holidays: Where to see holiday lights | Santa's back with inflation, inclusion on his mind | 4 ways to limit your holiday debt | Inflation 'definitely a guest' at holiday celebrations this year
Home » Business & Finance » IMF warns of higher…

WASHINGTON (AP) — Two principal economists painted very different pictures Thursday of what the global economy will look like in the coming years.

Kristalina Georgieva, managing director of the International Monetary Fund, told an audience at Georgetown University on Thursday that the IMF is once again lowering its projections for global economic growth in 2023, projecting world economic growth lower by $4 trillion through 2026.

“Things are more likely to get worse before it gets better,” she said, adding that the Russian invasion of Ukraine that began in February has dramatically changed the IMF’s outlook on the economy. “The risks of recession are rising,” she said, calling the current economic environment a “period of historic fragility.”

Meanwhile, U.S. Treasury Secretary Janet Yellen, on the other side of town at the Center for Global Development, focused on how the U.S. and its allies could contribute to making longer-term investments to the global economy.

She called for ambitious policy solutions and didn’t use the word “recession” once. But despite Yellen’s more measured view, she said “the global economy faces significant uncertainty.”

The war in Ukraine has driven up food and energy prices globally — in some places exponentially — with Russia, a key global energy and fertilizer supplier, sharply escalating the conflict and exposing the vulnerabilities to the global food and energy supply.

Georgieva said the IMF estimates that countries making up one-third of the world economy will see at least two consecutive quarters of economic contraction this or next year and added that the institution downgraded its global growth projections already three times. It now expects 3.2% for 2022 and now 2.9% for 2023.

The bleak IMF projections come as central banks around the world raise interest rates in hopes of taming rising inflation. The U.S. Federal Reserve has been the most aggressive in using interest rate hikes as an inflation-cooling tool, and central banks from Asia to England have begun to raise rates this week.

Georgieva said “tightening monetary policy too much and too fast — and doing so in a synchronized manner across countries — could push many economies into prolonged recession.” Maurice Obstfeld, an economist at the University of California, Berkeley, recently wrote that too much tightening by the Federal Reserve could “drive the world economy into an unnecessarily harsh contraction.”

Yellen agreed Thursday that “macroeconomic tightening in advanced countries can have international spillovers.”

The two economists’ speeches come ahead of annual meetings next week of the 190-nation IMF and its sister-lending agency, the World Bank, which intend to address the multitude of risks to the global economy.

Georgieva said the updated World Economic Outlook of the fund set to be released next week downgrades growth figures for next year.

Many countries are already seeing major impacts of the invasion of Ukraine on their economies, and the IMF’s grim projections are in line with other forecasts for declines in growth.

The Organization for Economic Cooperation and Development last week said the global economy is set to lose $2.8 trillion in output in 2023 because of the war.

The projections come after the OPEC+ alliance of oil-exporting countries decided Wednesday to sharply cut production to support sagging oil prices in a move that could deal the struggling global economy another blow and raise politically sensitive pump prices for U.S. drivers just ahead of key national elections in November.

Yellen said since many developing countries are facing all challenges simultaneously, from debt to hunger to exploding costs, “this is no time for us to retreat.” 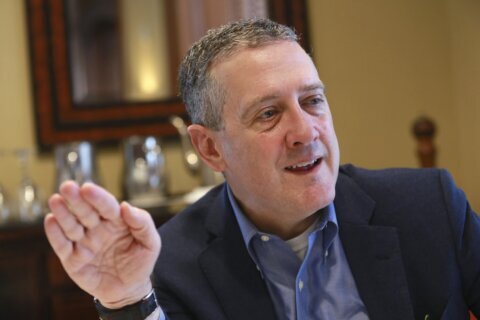