The short supply of new vehicles continues to drive demand, and prices, for used vehicles higher, and buying used can now cost almost as much as buying new.

In some cases, more.

New and used vehicle search site iSeeCars reports in April, the average slightly used model — based on sales of 2020 and 2021 models — was just 1% less than its new model counterpart.

The Camaro ranks No. 1 in the D.C. market for used over new. The Kia Telluride ranks No. 2, with a one- to two-year old model selling for an average 14.5% more than new. That’s followed by the Dodge Charger, at 10% more; the Toyota Tacoma, at 9.8% more; and the Toyota RAV4 Hybrid at an average 7% more than new.

The main reason buyers are willing to pay more for a slightly used vehicle is because it’s an in-demand model and there are few, if any, new versions on dealer lots.

Those used vehicles that cost as much or more as their new versions are also at the extreme ends of the market, led by large, expensive SUVs, and small economy vehicles.

Nationwide, the king of used vehicles is the very expensive Mercedes-Benz G-Class, an average 21.5% more than a brand new version. That’s almost $41,000 more. A brand new G-Class starts at around $133,000.

“The G-Class opulent off-roader is a status symbol that had record sales numbers in 2021. Its success led to a shortage of new versions, with wait times exceeding a year, forcing dealers to halt orders in January and leading well-funded buyers to the used car marketplace,” Bauer said.

Below are the top 10 used vehicle selling for more than a new one in the D.C. metro market, according to iSeeCars: 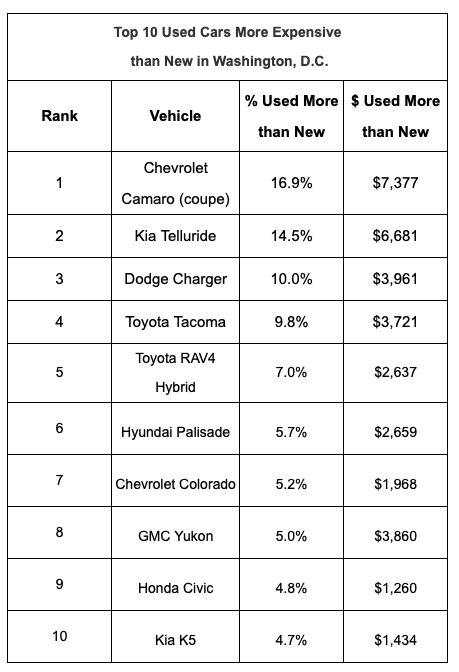