How much longer is the DC area’s record housing market sustainable?

Home values in the D.C. metro have been appreciating for eight years now, but cracks could be starting to show.
Listen now to WTOP News WTOP.com | Alexa | Google Home | WTOP App | 103.5 FM

Home values in the D.C. metro have been appreciating for eight years now, a historic run, and the past three years has seen pronounced momentum of double-digit price growth.

Corey Burr, at TTR Sotheby’s in Chevy Chase, has been representing buyers and sellers in the D.C. area market for more than 30 years. He believes the market is beginning to show early signs of cracks.

“When one calculates the increase in prices and the increase in interest rates, the carrying cost for properties has gone up by about one-third in one year. That same level of appreciation and interest rate increases is just not sustainable, I don’t think, over time,” Burr said.

But he notes that “over time” is historically relative.

“The Federal Reserve increased its rates from 2003 to 2007 by four percentage points. And it took until 2008 for the back of residential real estate to be broken, five years after the Fed embarked on its interest rate increases. The current Fed has increased rates just one-quarter of one percent, so we are a long way from having the cumulative effect of more expensive money on home sales,” Burr said.

Burr does believe the cost of money currently has not risen to a level that, alone, would significantly slow sales in the D.C. market. But he does predict 30-year mortgage rates could reach 6%, or even 7%, three years from now.

Other factors that could impact the local residential real estate market going forward include unreasonable list prices by sellers, which Burr said he has not seen yet, homes sitting on the market longer, list price reductions by sellers, a buildup in inventory or more buyer contingencies in offers.

Home sales in the D.C. region do continue to slow. Closed sales in March were 7% lower than March of last year, and pending sales, or contracts signed to buy but sales not yet closed, were down 12% year-over-year, according to listing service Bright MLS.

In Northern Virginia, the median selling price is now $650,000, 9% more than a year ago, according to the Northern Virginia Association of Realtors, which also notes a 5% drop in year-over-year sales.

Bright MLS’ Home Demand Index, based on listing searches and agent showings, is in the “moderate” range and the index is down 18.5% from this time last year.

“The region remains ideal for younger people. It has a suburban feel, there are lots or parks, the mountains and ocean are nearby, there are many high-paying jobs, it is a magnet for private employers, there are excellent universities, and a well-educated workforce, all of which should support a market downturn,” he said.

Below is a snapshot of March sales activity in the D.C. metro region: 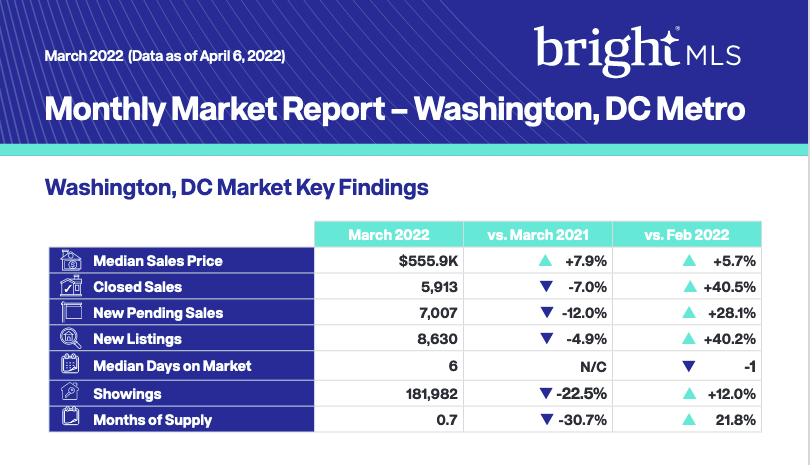